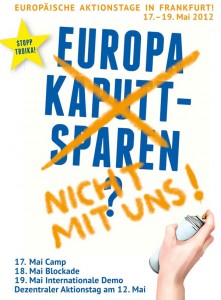 New international call to Blockupy from attac academic advisors and others.

Reposted from www.stop-neoliberal-crises-politics.org (in DE, FR, IT, ES there):

We are experiencing the deepest crisis of capitalism since the great depression of the 30s – and the European governments continue to pour oil on the fires! From the very beginning, some governments have prevented a solidarity-based solution to the crisis in Europe and are significantly responsible for its exacerbation. This refers particularly to the German government, which, in August 2008, blocked a substantial economic stimulus package for Europe. Hardly had the recession reached its lowest point in Germany in 2009, when the German government preached the necessity for hard austerity policies. The “debt brake” was anchored in the constitution: politics disempowered itself, shaped by neo-liberal ideology. The austerity measures taken in various EU states affected above all wage-earners, pensioners, the unemployed and the self-employed, while the wealthy, the banks and the corporations were spared. In spring 2010 the German government blocked aid for Greece, causing a steep rise in the yields of Greek government bonds and thus an increase in national debt and making a solution of the crisis more difficult and expensive. The loan agreements with Greece and other countries in crisis and their ridiculous austerity demands only made the crisis worse. For example, the reduction in the Greek minimum wage does not contribute to an increase in “competitiveness”, as the country’s current account deficit is as much due to the mercantilistic policies of the core eurozone countries, as to the role of deregulated finance. Instead, the reduction of the minimum wage has destroyed the internal market further. This example makes clear that the current crisis politics redistributes wealth from wage-earners to those who possess the capital, regardless of the macro-economic and societal consequences. Greek salaries have already dropped by 20-30%, hundreds of thousands of people are losing their jobs, over 10,000 schools are closed, hospitals are running out of medication, children are starving. Similar developments are also looming in Portugal and in other European countries.

Neo-liberal politics, whose failure has become obvious in this crisis, is being radicalised once more. The aim of the “fiscal pact”, for example, which was agreed by the heads of state and heads of government of 24 EU states on 2nd March 2012, is to make neo-liberal austerity policies legally binding for all time. A “debt brake” in line with the German model should be anchored across the whole of Europe. National budget deficits should, in future, be capped at 0.5% of GDP. This plan overlooks the fact that already in the 1990s the “Stability and Growth Pact” agreed by the European Economic and Currency Union, which had allowed a budget deficit of 3% of GDP, could not withstand the reality of a capitalist society dogged by crises. The 3% deficit was frequently exceeded. The “Treaty on Stability, Coordination and Governance in the Economic and Monetary Union”, as the Fiscal Pact is officially called, is more than the result of unrealistic plotting by neo-liberal economists and politicians. Further waves of privatisation, destruction of jobs, restriction of public services, social degradation, and wage reduction, are pre-programmed across the whole of Europe; and all to protect the profits of a small group of rich capitalists. The destructive policies which have been pushed ahead mainly by the German and French governments have been accepted and put into practice by nearly all EU governments, because in every state there is a dominant wealthy clique who profits from the increasing pressure on the wage-earning population.

The European crisis policies lead to an increased undermining and devaluing of democracy. Not least through international pressure were the governments in Greece and Italy removed from office and replaced by a government of “technocrats” in order to calm “the markets”. These governments make far-reaching decisions without having the legitimacy of being elected. A proposed referendum on the austerity measures in Greece was quickly quashed after pressure from the ruling powers. Elections become meaningless when the large parties represent more or less the same policies, as recently in Portugal and Spain. Responsibilities are moved from the national level to the EU-level without an adequate democratic control of the activities of the EU institutions such as the European Commissions, the European Central Bank, or the European Court of Justice. We note with great concern the increased nationalist, racist and fascist movements in various European countries.

And yet the prevailing policies are not without an alternative. A significant alternative, however, is only possible when the roots of the crisis are correctly identified. National debt crises form only one aspect of the current European crisis, in which the tensions of European integration (unequal development, common financial policies without common policies on wages, taxation and industry) collide with a structural over-accumulation of capital. There is too much capital, measured by the possibilities which remain to exploit work and the environment.

An alternative strategy for attacking the crisis needs to include the following elements:

– No ratification of the Fiscal Pact

A public debt audit must clarify how the debts were incurred and who is in possession of the government bonds. One person’s debts are another person’s wealth. The savings and pension entitlements of the broad mass of the population must be secured, while the interest and repayment entitlements of the wealthy, the banks, the hedge funds and the corporations must be cancelled.

– Nationalisation of the banks

Banks which have been saved by public funds must be nationalised. Banks which are “too big to fail” must be divided up.

– Radical redistribution of income and wealth

We need a tax on financial transactions, an increase in taxation on capital returns, a re-introduction of wealth tax and a much stronger progression in income tax, in order to achieve a lasting financing of state spending and increase in benefits, and to enable social and environmentally necessary investments, as well as to combat world poverty.

Mass unemployment, low wages and wage reduction are important reasons for decreasing wage rates and the creation of surplus capital which inflates the financial sector. There must be an end to the manipulation of unemployment statistics. Mass unemployment can only be overcome by a radical reduction in working hours.

Democracy must be strengthened at all levels, especially at the European level, and must also include the economic sector. It cannot be possible that democracy comes to a stop at the gates of the factories and the banks, and that a small group has the means of production at its disposal, when human survival depends on it.

The “Arab Spring”, the movement of the “indignant ones” in Spain, the numerous strikes and demonstrations in Greece and the worldwide “Occupy” movement which started in the USA, are all a source of encouragement. It is high time to strengthen the protests and to take them to the place where the European crisis policies are apparently decided. This is why we are announcing the world-wide decentralised protest demonstrations on 12th May as well as the European protest demonstrations which will take place in Frankfurt am Main on 17th-19th May 2012.