Blockupy Frankfurt Day 1: 16 May – Frankfurt effectively in ‘State of Exception’

21:45 CET: as we enter an unseasonably cold night, thoughts turn to tomorrow’s activism. We’re going to sign off the blog for today. Thanks for reading.

(above) Water cannon stand ready between Eschenheimer Tor and Hauptwache.
20:55 CET: there are now about 100 activists in Hauptwache as people drift away. There is a call for a plenary meeting at the old university campus at Bockenheimer Warte about 3km NW of Hauptwache. 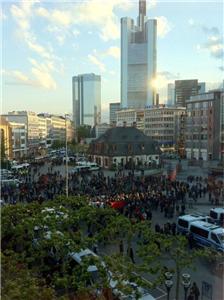 20:33 CET: Above the view of the demo on Frankfurt’s Hauptwache. Towers from L to R: ECB – Commerzbank tower – former Dresdner Bank HQ – Deutsche Bank offices – a second old Dresdner tower, now used by Deutsche Bahn. In the foreground the squat baroque building was once a gaol.
20.08 CET: Just posted by Jerome Roos over at Roarmag.org: “There is something different about Blockupy Frankfurt, the pan-European days of action on May 16-19. Not only will Blockupy be the largest transnational street demonstration of the Occupy movement so far; it is also expected to introduce innovative new tactics into the movement that could see an escalation of direct non-violent confrontation with the corporatist state and the global financial institutions responsible for causing the current capitalist crisis …” Read More
19:32 CET: Let’s remind ourselves of Art.8(1) of the German Constitution: Alle Deutschen haben das Recht, sich ohne Anmeldung oder Erlaubnis friedlich und ohne Waffen zu versammeln/all Germans have the right of unarmed assembly, without either prior registration or permission.
19:30 CET: today’s balance from Frankfurt: arrests: 28 – details taken 560.
19:12 CET: the assembly (c.600 people) in Frankfurt’s Hauptwache has declared by megaphone that it is registering to take place and that it is a demo for freedom of thought. The police have responded by declaring the demonstration “dissolved”, ordering people to disperse, and are trying to seize the megaphone.
18:58 CET: people have managed to congregate in Hauptwache for tonight’s planned “Blockupy rave” but reports are coming in that the Federal Constitutional Court (Bundesverfassungsgericht, Germany’s highest constitutional court) has confirmed the complete ban on assembly with the exception of the demonstration on Saturday in “considering an express request”. It has now been confirmed that this is the final judgment.
17:19 CET: checkpoints have now been set up around central Frankfurt in a semicircle from Hauptwache to the main rail station, then up to the old city defences. People wishing to pass into the financial district are subject to spot checks. It seems in particular that people with rucksacks will be questioned.
17:14 CET: It should be noted that the one exception to the general ban on protest, which the Administrative Court in Kassel has permitted, will be full Blockupy Demonstration on Saturday, which is permitted to begin at Baseler Platz (main railway station) and to proceed to the Opernplatz via the banking district.

17:05 CET: Above a picture of the Hauptwache end of Germany’s busiest shopping street (the Zeil) right now.
16:43 CET: To British eyes the police tactic of dispersal and space protection may look like away of denying Blockupy nice coverage of massed ranks, but it also permits “nomadic” tactics as British protesters adopted in London in 2010. See previous blogs. There are already reports of a hit and run paint attack on some council offices in central Frankfurt.
16:11 CET: the police have acted to prevent a planned assembly before the DGB House in Frankfurt (69-77 Wilhelm Leuschnerstrasse/ Lower Main Quay) by kettling the property, despite the arguments of activists that they are permitted to be there.
15:47 CET: the Blockupy Alliance are confirming in their current press conference that demonstrations and spontaneous actions will take place irrespective of the Kassel court’s decision. Die Linke representative in Hesse’s state parliament has called the total ban as a “mess without an end”, while Interior Minister Rhein has argued that a proper if difficult balance has been maintained between constitutional rights and people’s well-being. The FDP, Greens and SPD have reaffirmed their belief in the right to protest, while refusing to criticise the decision of the Kassel court.

15:20 CET: Police have openly stated that they are enforcing a “Space Protection Concept” following the decision of Hesse’s Administrative Appeals Court. This means that police will stop any suspicious group and given the a verbal warning. If this is unproductive, group members will be asked to produce papers granting express approval to be where they are. If these are not forthcoming, all persons will be taken into preventative detention.
14:55 CET: Frankfurt, like many large cities, has tour guides who lead groups around the tourist sites. Except not any more – apparently the group tours qualify as assemblies and are thus banned until Sunday

14:40 CET: the confirmation of the total ban on protests and the heavy police presence around Willy-Brandt Platz has led to a call for Blockupy activists to meet at 16:00 local time on the banks of the Main river before the HQ of the Alliance of German Trades Unions (DGB).
14:35 CET: For those who don’t know, Frankfurt’s ECB tower is to be superseded by a larger structure in the east part of the city, close to the port. I mention this because a police helicopter is clearly hovering over this part of town, which is currently a large building site.
14:10 CET: Hessen’s main news channel is reporting that the annual laying of a wreath at a monument to the homosexual victims of the Nazis, planned for Thursday, has been banned by the authorities. It appears to qualify as a protest for the purposes of the global ban on demonstrations.
Publikative.org has more (in German).
13:50 CET: The current headline of the Frankfurter Rundschau’s website sums it up (tr.):
Camp cleansed, protest forbidden
13:30 CET: roundup:
11:00 CET: blog paused.
11:00 CET: Britain’s Guardian newspaper is happy to report on its frontpage that an Occupy protest in Moscow has been cleared with 14 arrests, but has completely ignored the clearance of Occupy Frankfurt.
10:57 CET: the Camp has been cleared of Occupists. Towards the end the police became more forceful, with one hitting a peaceful protester round the head in front of cameras.
10:52 CET: the Camp has for the most part been cleared of Occupists, with the c.10 remaining seated protesters now being carried away.
10:50 CET: The first full Blockupy event will be a rally at 14:00 in Taunsuanlage (the parkland between the ECB and Deutsche Bank).
10:33 CET: unbelievably policemen in chemical emergency protection suits have entered the camp to dispose of the paddling pools filled with paint.
10:32 CET: police have made their first arrest – the grounds are unclear.
10:27 CET: Finally a proper livestream http://bambuser.com/v/2649532
10:20 CET: as the police are sprayed with water-based paints, it should not be forgotten that this eviction is taking place in the context of a clearly unconstitutional attempt by the authorities to ban all protest from Frankfurt am Main during 16-19 May. On appeal the Frankfurt Administrative Court has permitted a three of the fifteen proposed actions. Furthermore, the police have had to rescind their ban on named individuals from entering inner Frankfurt (which amounted for many to house arrest).
10:10 CET: One of Occupy Frankfurt’s actions was to utilise the number of ex-finance workers who were supporting the camp, including one credit rater from Dresdner Bank and another that was a lawyer for Deutsche Bank. The camp set up its own monetary system under the auspices of the European Occupied Central Bank, and even constituted a credit rating arm which duly rated all financial products BB+ or less – that is to say “speculative”.
10:04 CET: scuffles in the camp as the police are splattered with paint. Some activists have had paint baths to make their eviction more colourful. The police are now threatening arrests for this.
09:59 CET: police have arrested a cyclist, presumably for cycling on the cracks in the pavement. 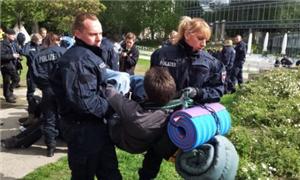 09:52 CET: the first Occupists have been removed from the camp.
Recording of the police action here.
09:47 CET: The police have gone in.
09:40 CET: police have issued a final warning. A banner close the the ECB states that the banks want the police to deal with the protesters quickly, before they find out the police pension plan has been cut.
09:20 CET: Caesar-style the police have constructed a double kettle around the camp, preventing exit, but more importantly entrance by Blockupy activists wishing to join the Camp. Occupists have been informed anyone partaking in a sitdown protest will be arrested.
09:00 CET: the police are currently handing out the eviction order in the Camp. The mediation has principally been a plea for a voluntary exit from the square.
08:30 CET: Police have announced by loudhailer that a delegation from Frankfurt’s Public Order department is making its way to the Occupy Camp to attempt a new mediation. The public offices are not far from Willy-Brandt Platz – about 1km due east. In response to this turn of events, a block of riot police have moved quickly from the square in the direction of the main railway station.
08:20 CET: up to about 300 people in the Occupy camp now. Reports are that the police delay may be due to a final legal appeal by a camp member. It is being reported that this appeal has been dismissed summarily and the Occupy camp clearance unto 16:00 Saturday has been confirmed. In response Occupists have begun their sit-down protest.
08:05 CET: The 08:00 deadline has passed and the police remain at a distance. An Occupist is exhorting comrades to peaceful resistance, though reporters are doing their best to provoke evidence of violent intent.
07:55 CET: With a few minutes before the police deadline for clearance, a group of riot police are kitting up.
07:15 CET: 35-45 police vans are parked in Willy-Brandt Platz, along with several TV mobile units. About 150 people are in the camp at the moment, with this number increasing as Blockupy activists join in solidarity. The public transport stations in the vicinity have been closed by the authorities.