Blockupy Frankfurt Day 2: 17 May – for the freedom of assembly

23;32 CET: We close today’s blog with a link to the excellent photo slideshow of Sterneck.
21:58 CET: One cannot doubt the importance of today’s protests and their successfulness. What occurred in the Paulsplatz in particular had been declared officially and legally inexistent by state and court. Yet, as the demonstrators held their copies of the German constitution aloft, the police shrank from the square and the citizenry could pass onto the Roemerberg. The reflexivity of demonstrating for the right to demonstrate itself made a mockery of court decisions upholding a manifestly authoritarian general ban on protest in Frankfurt. On a cool but sunny day in May, once again the Paulskirche gazed down on an epochal struggle for the rule of the people.
20:08 CET: RTL2, the German cable channel, seems to be channeling Fox News. It is speaking of demonstrators ready for violence even as they show pictures of democrats holding the constitution high in Paulsplatz. 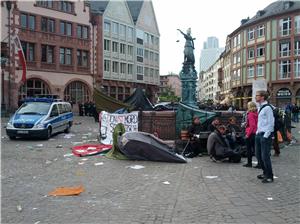 19:30 CET: Römer: Some police using painholds to carry away the last demonstrators, some of the carried away are screaming of pain, reports BlockupyPresse.
19:26 CET: Good to see Frankfurt Uni’s Prof. Frank Nonnenmacher (social science and politics) with his colleagues at the protest, to defend the basic right of assembly against the general ban in Frankfurt.
19:19 CET: the Roemer has been largely cleared on the north side by the police. The justification: protest is forbidden.
19:10 CET: the police stop again, and wait further orders.
19:05 CET: the clearance has begun in earnest. German musician Konstantin Wecker calls this the “funeral of democratic rights”. Others “capital versus humanity”.
19:02 CET: Clearance of Roemer looks immanent.
18:35 CET: situation serious now in Paulsplatz/Roemer. Police moving in in riot gear.
18:05 CET: A sit down protest is blocking police entry to the Roemer. This was, after all, a Roman fortified camp once.
17:45 CET: Police calling for protesters to leave the Roemer by the south side or face clearance.

16:52 CET: the Hessischer-Rundfunk channel which has been peddling the “approaching barbarian hordes” line of Boris Rhein is softening its line favour of the pro-democracy protests. They run the above image calling it “a great picture” of “peaceful protest”.
16:45 CET: People stopped in transit to Frankfurt have allegedly been asked to sign bits of paper in which they renounce their right to protest. No comment required. Apparently 9 buses from Berlin have been halted or turned back (hat-tip Janine Wissler)
16:30 CET: riot police have just exited from the front of Frankfurt’s historic townhall, thus entering the Roemer at the middle of the demo. They have formed a line in front of the Town Hall.
16:25 CET: Police have formed lines with a view to clearing Paulsplatz. About 2,000 people on the Roemer are chanting go away to a police line which is blocking the narrow exit of the Roemer onto the tramlines that pass by Paulsplatz.

15:48 CET: (above) the Roemer is now packed as citizens take advantage of the apparent relaxation of police restrictions. Picture taken from the steps of the Town Hall.
15:38 CET: with the police in temporary withdrawal tents are going up on the Roemerberg and in Paulsplatz. People are singing the White Rose of Athens and the atmosphere of a peoples festival reigns in the May sunshine. 500 people are currently outside the Town Hall. Others remain in Paulsplatz.
15:21 CET: first tent erected on the Roemerberg – the square next to Paulsplatz where the Town Hall is located and which constitutes Frankfurt’s civic centre.
15:13 CET: situation eases at Paulsplatz as Polly takes the kettle off. Democrats in good voice. Some raise the aims as if in victory as they move back into the centre of the square.

15:09 CET: an inner and outer kettle at the Paulsplatz now. People remain with linked arms.
14:56 CET: Police decide press conference on steps of St. Paul’s Church at 15:00 is cancelled. Blockupy disagree. Another clause of the constitution (press freedom) hit by austerity cuts?
14:46 CET: at the main railway station, where people are still disembarking all the time, tensions are increasing. Police are pulling on helmets. In Paulsplatz the pressure is also being increased; the police saying they have asked demonstrators several times to leave the square. 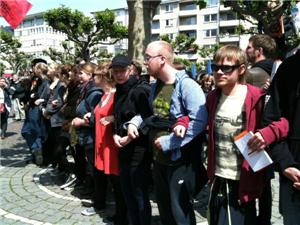 14:13 CET: during the last attempt by the police to make arrests the demonstrators cleverly kettled themselves by linking arms and moving as one.
14:07 CET: it appears that the police that moved in became ringed bychanting demonstraters, and so have retreated. Applause in Paulsplatz.
14:02 CET: the police have moved in on the Paulsplatz demonstrators.
13:56 CET: the police kettle is itself surrounded by many more people who have come to Paulsplatz.
13:48 CET: finance news: shares in Spain’s Bankia bank have fallen on news that EUR1bn has been withdrawn by worried depositers.
13:33 CET: police have now kettled the Paulsplatz demo – no entry to the square.
13:30 CET: there are assemblies as Baselerplatz (rail station), Bockenheimer Warte (old uni bldgs), and “democracy test” demonstration of about 300 people proceeding from the university under police supervision.
13:10 CET: people now calling for the resignation of hardline interior minister and failed Frankfurt mayoral candidate Boris Rhein. Hard not to think he is punishing Frankfurt for his electoral defeat last month.
13:05 CET: up to a thousand people at Paulsplatz. A delegate from the mighty trades union IG-Metall has been speaking. The police at the scene seem relaxed enough but 30 police vans have been seen speeding up the road along the Main river in this direction.
12:46 CET: over 400 people in Paulsplatz. Some are holding up copies of the German Constitution. 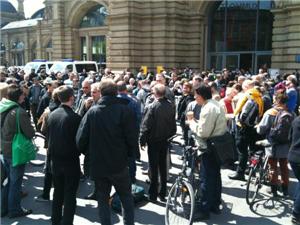 12:16 CET: main railway station (Baselerplatz) at the moment. There are about 200 people also at the Roemer/Paulsplatz.
12:09 CET: police spokesman “protest action today could endanger the current permission granted to Saturday’s demo”.
11:32 CET: the police have confirmed they have stopped 5 buses now at the Bad Homburg intersection north of Frankfurt. An activist has told the Hessisch Rundfunk news-channel that the buses have been placed in a motorway control area and portable toilets have been installed. It looks like they could be there a long time, reports the activist.
11:18 CET: The police are demanding access to the the property of the German Alliance of Trades Unions (DGB), which sits near the lower Main river near the main rail station. They wish to prevent assemblies organising there.
11:05 CET: Funnily enough, as the Federal Constitutional Court handed down its decision on Blockupy yesterday, it was being visited by a delegation from the UK Supreme Court, led by Lord Hope. Apparently discussions covered “relations between constituional courts and parliaments” and “the role of constitutional courts in European integration”.
10:45 CET: finance news – the rating agency Fitch have concluded that banks are short USD566m in meeting the incoming Basel III capital requirments for financial institutions. The express point of Basel III is to create banks which will be able to meet any crisis without having to be bailed out. The point, however, is not simply that banks have failed to meet Basel III, but that Basel III is astonishingly weak in its demands. One of the historical examples on which Basel III attempts top ground itself is that of Canadian banks in the 1930s, which following a build-up of capital reserves in the fat years, weathered the Great Depression. Recent academic research has shown that the capital reserves of these Canadian banks was (with due historical adjustment) 22% higher than the requirements set by Basel III today. Conclusion: Basel III is not fit for purpose.(ref Wagster, (2012) J. Bank. Reg. 89).
10:30 CET: there are reports that at least one Autobahn junction around Frankfurt (the Bad Homburger Kreuz) is subject to police checkpoints for suspicious vehicles.

10:10 CET: hat tip to Blockupy for the above pic of police boarding one of the Berlin buses headed for Frankfurt.
10:00 CET: Incidentally, yesterday the sponsor of the complete ban on protest in Frankfurt, councilor Markus Frank, stated that the federally affirmed Kassel Court decision for a ban of all protest until Saturday was “forward looking”. It seems that extraordinary measures may be in place, but that the future is likely to be permanently extraordinary.
09:45 CET: Police have confirmed they have stopped three buses attempting to reach Frankfurt am Main from Berlin. Has an entire city been kettled?
09:10 CET: Reports that three buses carrying people to Blockupy Frankfurt from Berlin have been stopped by police and escorted back.
09:03 CET: there are suggestions that people are being prevented from traveling from Berlin to Frankfurt am Main. The last time the Berlin authorities did that people had to cross into the west via Hungary and Austria.
08:55 CET: The Blockupy Alliance have announced a revised “cultural programme” for today, in spite of the ban:
10:00

Manifestation for an unrestricted freedom of assembly, Paulsplatz
13:00

Flashmob for the international Day against Homophobia, Hauptwache
17:00

Transnational Assembly at the Gewerkschaftshaus
20:00

He who seeks to regulate everything by law, is more likely to arouse vices than to reform them. It is best to grant what cannot be abolished, even though it be in itself harmful. How many evils spring from luxury, greed…and the like, yet these are tolerated—vices as they are—because they cannot be prevented by legal enactments. How much more then should free thought be granted, seeing that it is in itself a virtue and that it cannot be crushed! (Spinoza, Theological-political Tractate Ch.20/41) 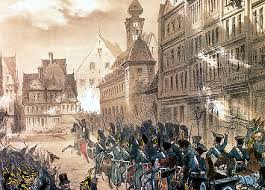 08:34 CET: The picture above is of central Frankfurt in the 1848 revolution: democrats storm a line of Hessian artillery.

08:30 CET: Morning. Reports are that all was quiet overnight (Your crit saw and heard nothing, certainly). What is interesting is that to a degree the days of protest have a trajectory which mirrors that of the general crisis – an existing movement against out-of-control banking has been evicted – further movements have erupted against austerity measures, and now the repression of both movements has refocused attention on what lawyers would call civil and political rights.

One could argue that the authorities have been successful in thus turning ire away from Frankfurt’s banking district and onto the Paulsplatz, where a supposedly illegal demonstration will take place in defence of freedoms of assembly and thought.

However, those who have been paying attention to the global trends since the ‘End of History’ will be fully aware that the convenient nexus between democracy and capitalism has been abandoned in favour of the latter (so-called authoritarian capitalism). The doctrine had its first examples in SE Asia, such as in Singapore and Malaysia, but spread in naughties to Italy and then wider. We need not repeat the recent European events which confirm and expand this wave; Frankfurt tells us enough about where we are. The point is that only our current leadership could perceive that the economic and political as wholly separate, for it is this same leadership which has been well-schooled in our dominant theology.