Anorexia and the Political 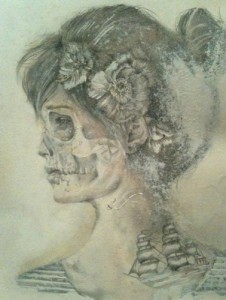 Stretched across the critique: have we lost connection with each other? Have we lost a sense of grounding as critical legal scholars? However we frame this question, it goes to the heart of a fear that critical thought is not in touch with any reality. Some paper presentations at the Birkbeck School of Law 2012 Annual Post-Graduate Conference held May 18-19th demonstrated that many emerging scholars and researchers are struggling to bring back experience, to bring back something of the personal – not at the expense of theory – but as a wake-up call of sorts. This impulse is a movement pushing beyond the post-structural theory that has enchanted many of us.

Such movement beyond, while not denying the intellectual heritage, is exemplified in the work of Professor Catherine Malabou who has been leading a series of seminars as Writer-in-Residence at Birkbeck School of Law for the past few weeks. Malabou’s over-arching question guiding the seminar work is whether there is a an ‘undeconstructable’, that gets away from circulating within the symbolic, that we can potentially consider through some aspect of our biology, our materiality. This question turned towards science, biology, blood, brains, bones … symbols, yes, and the material that keeps our bodies alive. Speaking to this directly is not what prompted my writing here. Rather it was a point made in the seminar when speaking of bodies, of control, of political acts and breaking free from the technologies that bind us: that anorexia is a political act. This statement is what led me at this point to consider if we have lost some grounding, as critical legal scholars.

To claim that anorexia is political is to detach from the foundation of our intricate connectedness that forms the political, the social, and our day-to-day realities and experiences. In terms of anorexia and eating disorders, these are strong women (mostly, but by no means exclusively) – not with vulnerable minds and weak bodies, but with resistant bodies and minds-of-steel. It takes overpowering control, resistance and determination to put oneself to the position of self-starvation. However, unlike hunger strikes or other political acts, in anorexia/ eating disorders there is no solidarity. Rather it is complete isolation. The self-taught and self-disciplined practice of denying food, or nourishment, is an inward turn where one closes oneself from others, from everyone. Not to take a stand and assert oneself, but often to disappear. Anorexia may be seen as a denial or an exercise of control over bio-technological powers, but it is equally the ultimate success of bio-technological powers that affect the complete denial of loved ones, of care, and of fundamental relationship. This is an illness of exclusion: excluding relationality, and claiming a false sense of freedom where all focus is concentrated on the hold and control to inflict suffering onto oneself.

Such power is admirable, yes, and involves extreme self-consciousness. But this is not a consciousness of anything real. Rather it is an extreme move of self-discipline, and one that cuts out life and pleasure in its most basic, biological level. Anorexia has been referred to as causing a ‘disorientation of the senses’, such that I do not see myself as inhabiting the external body, made of my flesh and bones. It is a disoriented substitution of the ‘social’ for the ‘symbolic’ and yet neither exist, both are abstractions – hence the disorientation and destructive drive. There is no negotiation, no circulation between the social and the symbolic. Rather, “the secret [of the eating disorder] is as much imposed by the absence of a real social alternative as it is a refuge from a symbolic one” (Martin, Performance as a Political Act. Greenwood Press, 1990). With anorexia, itself an extreme of a variety of experiences of eating disorders, the process of abstraction that in other contexts may be framed as leading to a political act, is denied circulation. There is distain and distancing from any sociability, any outside plurality that may need a functioning body – not a conscious act, but a consequence of forcing a body into dis-function. There is also distancing from the symbolic, from the body in the mirror that appears to ‘me’ disproportionately gigantic, that needs to disappear in order to be acceptable – in order to be fit to be ‘me’. The symbolic value of the body is lost and becomes an obsession to make disappear – every bump, every curve, becomes a material indication of the failure to be ‘ok’; what I see on my body seems to me a sign, a symbol, of my weakness and inadequacy. But this sense of myself is neither symbolic nor social, but distorted and takes dis-function as its goal. This is not ‘sticking it to the man’. This is self-destruction.

For some, this illusion of control over eating is the ultimate test of perseverance turned against oneself – it is the greatest test assumed by me onto me to deny basic biology (hunger) and, for some, to do this while pretending to continue life ‘as usual’. Yet there can be no social, no circulation to constitute a political when my being thrives on making itself, as it exists, disappear.

Therefore, I wonder what has happened to our sense of the political when this self-destructive disciplinary habit is explained as being a political act? Eating disorders really are destructive – but not necessarily to anyone but to the person who is in control of depriving him/herself of food. Perhaps it is a consequence of this distancing, and precisely un-political isolation which makes it seem acceptable to applaud an autonomous assertion of individuality, which in hyperbolic form is manifest as an eating disorder that one ‘grows out of it’, or returns ‘back to normal’ (a normal that, more often than not, is a politically aware, dynamic, intelligent person – seen to have struggled through a few difficult [classically, teenage] years). But the prolonged act and habit of anorexia/ eating disorders does not circulate in real life experiences and relationships with any other. Perhaps also, if someone does not look anorexic, one is assumed either to not have a problem, or to have gotten over ‘it’, or to have been ‘cured’ of such disorder – to have gotten a hold of oneself and as such, fought a ‘political’ battle. Such control might then be applauded, for successfully being able to deny oneself nourishment, but catching oneself before total destruction. But the disorientation towards the body that becomes reflexive habit within the experience of developing and sustaining an eating disorder often remains even though life may continue on a healthier path. The recourse and ultimate retreat to self-questioning and self-discipline does not disappear with a pill or some therapy. But neither can such retreat to isolation and disorientation be glamourised as a conscious political act.

Anorexia is non-productive. It persists through dismantling or failing in our basic fundamental relationality that makes us beings that exist because of, and through, our coming together in common with others. The plurality of our ontological selves is denied by the facade relied on in order to maintain the control of struggling with anorexia/ severe eating disorders alone, and in secret. By turning yourself onto yourself commonality, solidarity, and political acts, are negated. All that is left is loneliness, without community or solidarity. Complete non-political isolation.

To mask such experiences as empowerment, or as conscious rebellious and political acts is to support a false sense of power. Yes, it feels good to have such control and this can be emboldening and satisfying, and yet the choice and act of living with this control is based on a fundamental deprivation in private, in secret and is debilitating. This refusal for plurality, refusal for commonality even with oneself, cannot be political. It is instead truly nihilistic. It is death.

I am not soliciting agreement or claiming a position of privilege in sharing these thoughts here. But before turning to the words of the theorists (the sovereigns of much critical legal thought), it seems we need to think for ourselves. And in this context, to think what it is to be your worst enemy – not through public displays of sacrifice or fits of anger but through slow, silent, secret deprivation. Strong, intelligent people, mostly women, need not live out their politics by depriving themselves of nourishment and testing themselves based on their ability to privately refuse the basic biological necessity of food. I live my politics, yes, this need not be publically protesting on busy streets. The day to day can be, indeed, political. And yet politics depends on circulation – the political is a relation of being singular beings existing in plurality, in-common with others.

The mastery that many people with eating disorders rule over their basic needs is on the other hand a complete refusal of movement, of circulation, of relationality and of our ontological plurality. To claim this as a political act, for fear perhaps of seeming to accentuate typically young women’s vulnerability or reifying some embodiment of living-differently, is to take our critical edge too far. Politics needs relationship, just as perhaps critical thinking needs a reality check.

Anastaziya Tataryn is a PhD Candidate at Birkbeck School of Law, University of London