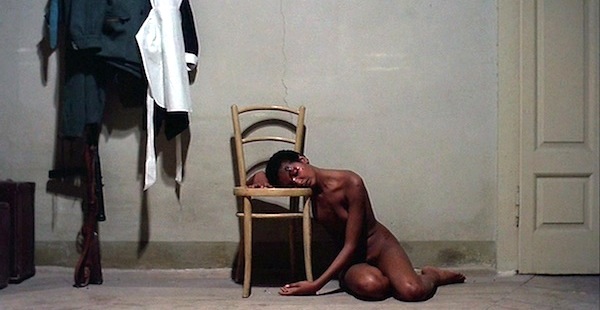 Pasolini’s controversial final film Salò (1975), based on Marquis de Sade’s The 120 Days of Sodom (1785), poses significant questions regarding the intersection between sadistic torture and sovereignty. The film is divided into four segments, heavily inspired by Dante’s Inferno: Ante-Inferno, Circle of Manias, Circle of Shit, and Circle of Blood. Salò focuses on four corrupt sovereigns after the fall of Italy’s fascist ruler Benito Mussolini in 1944. Four fascist libertines—the Duke, the Bishop, the Magistrate, the President—kidnap the most beautiful young people in town and take them to a villa, to an enclosed space called ‘The Republic of Salò’, a Nazi puppet state. From now on, the Republic of Salò becomes a fascist enclave from which there is no escape. Thus starts extreme abuse, torture, and the murders of young men and women for the sake of perverted lust and extreme pleasure. The fascist captors welcome the beautiful young Italians to hell with the following words:

You herded, feeble creatures, destined for our pleasure. Don’t expect to find here the freedom granted in the outside world. You are beyond reach of any ‘legality’. No one knows you are here. As far as the world goes, you are already dead. (Pasolini, 1975)

The young victims’ bodies become sites of repressive pain and sexual pleasure, bearing the scars of sovereign vengeance. The greatest strength of the movie lies in showing us that the appeal of pleasure is inseparable from the appeal of sovereign violence. Reminiscent of the rituals of primitive systems of cruelty, Pasolini almost succeeds in making the sadistic torture part of an entertaining spectacle. This festivity is, however, unlimited and protected by an unrestricted law of sovereign power. Thus, what we encounter in Salò is what I call the limitless ‘enjoyment of cruelty’, which makes torture the vengeance of four corrupt despots. Sovereign cruelty punishes the victims’ bodies without any guilt, while sexual pleasure becomes a weapon of total domination. Whereas physical beauty becomes a symptom of vulnerability, sovereign political power becomes a destructive power, a total form of fascism.

Torture is widely considered as a form of madness, as an ‘irrational’ act, as an unethical practice that is confined to corrupt administrations or totalitarian systems. It is also viewed as a juridical problem, as one of the basic principles of human rights. I suggest that both approaches misunderstand and simplify the role of torture; they fail to grasp the true purpose of torture within sovereign political power. Torture, I assert, is one among many manifestations of sovereignty as domination. Torture, therefore, needs to be considered in relation to other cruel manifestations of state sovereignty: for example, the destruction of ecological systems, the risk-security complex, the state of exception, and the complete animalisation of human beings carried out by neoliberal biopolitics. And yet torture is not one among these various forms of sovereign power. Torture is the most privileged actualisation of state terror, for it reveals the nature of sovereignty (and its rational consciousness).

How then are we to understand the relationship between torture and the detention of ‘enemy combatants’ in light of contemporary sovereign power? Torture has its own set of theological, philosophical, and political values. The physical destruction of the ‘enemy’ — from crucifixion employed by the Scythians in Antiquity, to the sleep deprivation and mutilated arms of the accused with a blunt knife put into practice during the time of the English Civil War, from public executions during the Middle Ages, to prolonged use of stress positions, starvation, beatings, electrical charges and extreme cold throughout the Cold War, and squeezing the testicles, hanging by the arms or legs, blindfolding, stripping the suspect naked, spraying with high-pressure water practised by specialized teams in Turkish prisons — in short, what we see before us today, is not the expression of incomprehensible horror. It is the exact opposite: the calculated expression and a rational necessity that define sovereign power. It is the same expression that led Pasolini to explore the nexus between torture, the state of exception and the biopolitics of late-capitalist hegemony. Today’s most likely successors of Pasolini’s fascist sovereigns are to be found in the torture chambers of Abu Ghraib and Guantanamo.

In the Republic of Salò, young captors are given the taste of sovereign vengeance in its most radical shape: that of the limitless enjoyment of sovereign cruelty and torture. Beyond reach of any ‘legality’, ‘herded creatures’ are reduced to bare life, life devoid of any value. In Abu Ghraib and Guantanamo, similarly, ‘enemy combatants’ are being given the taste of sovereign cruelty and the ‘liberal way of life’ at its most effective: that of the limitless enjoyment of sovereign vengeance, violence and systemic torture. Reduced to bare life, they are effectively stripped of all rights. Systemic torture starts at the top and trickles all the way down. Behind water-boarding is the commander. Behind the commander are the policymakers such as Dick Cheney, Donald Rumsfeld, George Bush and Barack Obama.

Torture creates victims who are not able to act. In torture, the subject’s immediate responses (anger, spite, revenge) against the oppressor are muted and thus take a detour through sublimation, inward suffering. Hence the favourite destination is not the courtroom but the camp where torture is practised secretly. ‘Creative’ forms of torture find expression in water boarding, sodomy and fucking. This is the paradigm of sovereign political power, of reign, that makes the liberal way of war operative. That is to say, torture and the state of exception are fundamental to the operation of neoliberal order as a whole. They are fundamental engagements of the war against everything. The bare life of victims has come to define contemporary society in the war against terror.

Sovereignty constitutes the political body by deciding who are reduced to bare and valueless life and who are recognised as valuable and ‘good’ life. The young victims in the Nazi-backed Republic of Salò, like the inmates at Guantanamo Bay and Abu Ghraib, are examples of people who have the first kind of life but not the second. They are reduced to bare and valueless life, but they are not recognised as having a valuable and good life. And because they are reduced to homo sacer (Agamben, 1998) under the rule of the sovereign power and violence on which sovereign political order rests, they can be tortured and killed.

This fear, and sadistic violence that follows, reconfigures neoliberal capitalism in the same sense that Hobbes and Schmitt treated a state of exception as a political kernel of the law, as a condition for the establishment of a totalitarian state power. And it is in this sense also that today we pay witness to a ‘cruel and vengeful sovereign power’ that has culminated in the public torture at Guantánamo Bay and Abu Ghraib, and the secret torture at CIA prisons, the extermination of precarious individuals with remote-controlled drone missiles, and extrajudicial killing, contracting out the secret transportation of ‘enemy combatants’ to third parties and states.

It is worth noting that Pasolini succeeds in presenting torture as a constitutive act of political and military organisation of the state. Torturers are normal (not mad and bad) sovereigns because the bodies of the victims are inscribed by signs and regimes of sovereign violence that is seen as ‘legally legitimate’. In this way the sadistic pleasure of the torturer meets the total passivity of the tortured body. In other words, the sadistic torture coincides with reactive subjects who are rendered obedient and subordinate their desires to sovereign political power.

Victorious only in perversion, the torturers derive pleasure from inscribing signs and regimes of sovereign violence on the bodies. In effect, signs and traces of sovereign vengeance become an integral part of oppressive norms that give rise to the creation of a legal sovereign state. Pasolini thus shows how torture is the interior dimension of state sovereignty that is ‘legitimized by fear’ (Badiou, 2008: 13), according to which political philosophy, from Hobbes to Schmitt, has defined the absolutist idea of state sovereignty.

Nevertheless, Salò does not only denounce torture, it also anticipates the crimes of state sovereignty. Torture as political: this is one of the contemporary dimensions of torture as an instrument of sovereign domination and repression. As mentioned before, Pasolini presents political dimensions of torture by means of four segments: Ante-Inferno, Circle of Manias, Circle of Shit, and Circle of Blood. Circle of Blood is particularly illuminating in this regard. At issue here is a kind of torture that is political, which is replete with sadistic violence, gore, blood, and death: precisely the sort of torture that the fascist regimes in Latin America and Turkey put into practice and is being practised in the torture chambers of the ‘liberal way of war’. The Circle of Blood symbolises torture as a paradigm for the intended destruction of the integrity of the humanness.

In the final sequence of scenes, an orgy of political torture is practised in a courtyard. While the young victims are subjected to the most brutal and almost unendurable torture and eventual execution, the fascist sovereigns derive greater sexual pleasure and enjoyment, from watching them suffer. Aroused by the display of suffering, the libertines begin to suffer with the victims they’ve once degraded, tortured and exterminated. Who’s torturing whom? What goes there? What does it all mean? The fascist sovereigns and the victims enter into a zone of indistinction, making it impossible to distinguish between obedience to the law and its transgression.

Thus the entire system would start to break down. But one of the libertines and a fully aroused soldier watch this deadly and inverted scene from an enclosed balcony, through a set of binoculars. The screams, the cries, the pains, and the suffering of the victims cannot be heard. Orff’s Carmina Burana is played in the background. We begin to witness eroticism, beauty and the suffering in silence. The camera then shifts from the suffering bodies to the fascist libertine, who is being masturbated by the soldier. The scene focuses on the voyeuristic and masturbatory victimiser, who sits with his back to the camera.

All of a sudden, the victimiser turns out to be an anonymous viewer. He becomes us, the audience. Voyeurs of the voyeurism of others, we are — by this conclusion — both distanced from and part of the film’s politicisation of sadistic violence. The sadistic pleasure of Salò is projected onto the audience: we are shocked and disgusted at sadistic torture, and are shocked and disgusted all the more when we realize that we ourselves have become silent accomplices to violence committed by the global sovereign order in our everyday lives.