The Further Criminalisation of Student Protest 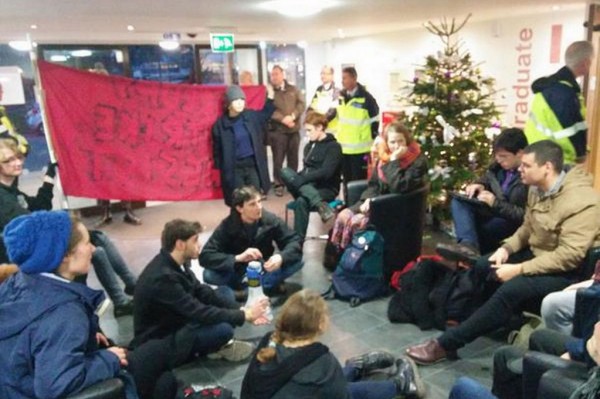 The Chancellor’s Autumn Statement has served as a reminder of the wider politics of austerity and its beneficiaries in the form of tax cuts and those at its detriment experiencing wage freezes and cuts in services and benefits. It was also a reminder of how the reforms to higher education and the introduction of full fees is part of the same political programme. This point was not lost on the students who protested on Wed 3rd December. The sensitivity of universities to such protest is in inverse proportion to their willingness to debate the changing idea of the university. Increasingly, universities have sought to criminalise protest on campus while employing marketing techniques to protect their brand. The actions of police on the University of Warwick campus on Wednesday 3 December are symptomatic and cannot be allowed to pass without comment. A letter from current Warwick faculty and students is posted below. (If you wish to add your name, please do so using the comment boxes below.)

We are writing to express our serious concern at the incidents which occurred on Wednesday 3rd December in Senate House when 25 Warwick University students, staging a sit-in to protest against university tuition fees, were subject to what appears to be excessive police action.

As you are aware, a video, which was subsequently posted on YouTube, showed footage of students being grabbed and pushed and having their hair pulled, followed by CS spray being used at very close range. Also in the footage, a taser gun can be seen and heard, and there have been subsequent reports that it may have been discharged against one student. Three students were arrested.

According to reporting in the Coventry Telegraph, the police were called by university officials to attend the protest after a claim that a protester had attacked a member of staff. There is nothing in the video or other reporting to suggest that there was an imminent threat at the time of the police action, and their behaviour appears disproportionate and unacceptable. ACPO guidelines, for example, state that CS spray ‘should not be used at a distance of less than one metre unless the nature of the risk to the officer is such that this cannot be avoided’ – it is not at all clear from the video footage and reporting that there was such a risk. The students state that they had been sitting in a circle discussing free education and the university community and that they had not been informed that the police had been called and nor did the police, on arrival, tell them why they were there.

We call on the university to publically affirm its commitment to democratic values and the rights of students and staff to protest peacefully against policies and practices with which there is disagreement. The university is our common space and we protest in the strongest terms against the violations that were allowed to take place here today.