“I am Charlie and I guard the Master’s house” 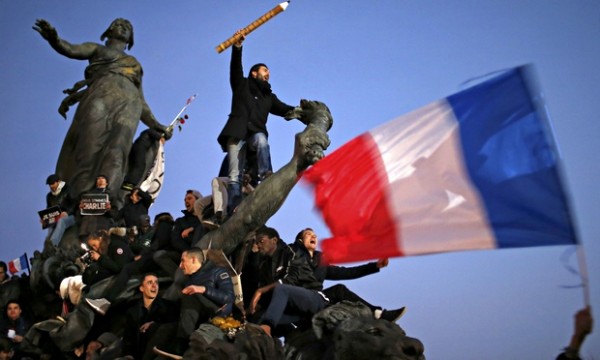 We condemn the Charlie Hebdo killings. We wholeheartedly and unreservedly condemn the killings and believe that no justification exists or can ever exist for them. We feel it necessary to make our condemnation explicit because we have found that there is a tendency to read an absence of condemnation into any discussion that does not halt at the point of condemnation. If you do read an absence of condemnation of the killings into this piece, ask yourself if what you truly demand of us, between your declarations of “Je suis Charlie” and your unyielding and uncompromising defence of free speech, is silence on this issue beyond a condemnation of the atrocity and those who enacted it.

Charlie Hebdo defended its publication of racist cartoons on the grounds that it was exercising a perfect form of free speech, adhering to an idealised secular liberal vision of free speech with no limits.  Except of course the limits imposed by the French state and the particular sensitivities of its friends and allies. For while Charlie Hebdo’s Islamophobic cartoons have been fervently defended on free speech grounds, Charlie Hebdo itself fired one of its writers for refusing to apologise for making an anti-Semitic joke about President Sarkozy’s son, France last year became the first country in the world to ban pro-Palestinian demonstrations, and around the supposedly free world we can face criminal charges and imprisonment for tweeting or posting a Facebook status. This poorly defined, often contradictory vision of free speech is significantly easier to exercise and laugh along with for those whose identities do not render them vulnerable to hate speech, police harassment and other forms of structural violence.

The most popular and celebrated means of defending ‘free speech’ in the wake of the Charlie Hebdo killings has been through the use of the #JesuisCharlie hashtag as a means of showing solidarity not only with the victims but also with Charlie Hebdo and what the magazine stands for; that is, as all those incessantly quoting Voltaire this week will tell you, not the actual content of Charlie Hebdo, but its right to publish that content. This show of solidarity with, or more accurately, identification as the magazine at a time when its writers have been subjected to lethal violence, sends a signal of unwavering defiance—the collective raising of a middle finger to the perceived threat that terrorism presents to western societies’ hard-won and hard-defended liberal freedoms, a statement that says “we are not afraid”, “we will continue to exercise our freedoms in the face of your attempts to destroy them”.

The #JesuisCharlie hashtag and its social media strategy of solidarity through identification with the victim is also an appropriation of what was a creative and subversive tool for fighting structural violence and racist oppression, perhaps most famously in the “I am Trayvon Martin” campaign. When young black men stood up and said “I am Trayvon Martin”, they were demonstrating the persistent and deeply entrenched demonisation of black men which not only sees them killed in the street on their way to the local shop, but also deems their killers innocent of any wrongdoing. When predominantly white people in France and around the world declare “Je Suis Charlie”, they are not coming together as fellow members of a structurally oppressed and marginalised community regularly subjected to violence, poverty, harassment and hatred. Rather, they are banding together as members of the majority, as individuals whose identification with Charlie Hebdo, however well-meaning, serves to reproduce the very structures of oppression, marginalisation and demonisation that allowed the magazine’s most offensive images to be consumed and celebrated in the first place. These are the same structures that saw Parisian police massacre hundreds of Algerians attending an independence protest in 1961 (it is hard to say exactly how many were killed because, as police later boasted, many of their bodies were thrown into the Seine); the same structures that breed the racialised poverty and police harassment that led to the 2005 Clichy-sous-Bois riots; the same structures that allowed the ban on the burka and have all but enabled a ban of the hijab.

Along with the Je suis Charlie tag, another has emerged, that of “Je suis Ahmed”, Ahmed Merabet, the Muslim police officer who was killed by the Charlie Hebdo attackers. The tag celebrates the heroism of the officer in dying in defence of Charlie’s right to ridicule his faith and culture. This is in line with and feeds the assimilative discourse surrounding the place of Muslims in the French state. The good Muslims can stay. The good Muslim is she who assimilates, she who apologises, she who hangs her head in shame, condemns her Jihadi compatriots and makes herself as little identifiable as Muslim as possible on a day to day basis. The best Muslim, the perfect Muslim, however, is the martyr—a martyr for the French state—a martyr who dons a police uniform and dies protecting the country’s glorified liberal values.

The dominant discourse can be captured as such: good Muslims behave like this and bad Muslims behave like that. Muslim scholars around the world have made clear that the Paris attacks are “un-Islamic”. So why are the Charlie Hebdo killers identified primarily as Muslim killers rather than as individuals who affiliate with and propagate a murderous and dangerous political ideology? Why are white supremacists, such as Anders Breivik, who in his manifesto describes himself as “100% Christian”, not portrayed as “bad Christians”?

With the commitment of 1 million euros to keep Charlie Hebdo up and running, down comes the already loose and slipping facade that the French republic is built on the principle of “égalité”, except in the most formal sense. Here is the state explicitly and publicly sponsoring a vision of free speech that sees no structural oppression, that sees no power, that sees no abuses of that power, that sees no silenced and marginalised minorities, no victims of imperialist wars, such as those waged by France in Algeria, Afghanistan, Mali and Iraq.

How neat for the French state to be able to spin the Charlie Hebdo killings into a fairytale in which it plays the role of the knight on horseback riding onto the scene to rescue western civilisation from barbarity. An unprecedented number of world leaders and state representatives joined the French in proclaiming western liberal values on a solidarity march through Paris last Sunday, including those from countries in which press freedom is elusive. How convenient this atrocity has been for the state. Its prize for ingratiating itself with “Je suis Charlie” is the legitimation and expansion of its power, and for Hollande himself, a steep hike in his popularity. Lost in the cacophony of “Je suis Charlies” at Sunday’s demonstration is any sense of what is truly at stake here: not our purported freedoms, but an understanding of how the hypocrisies of the liberal state keep us trapped in a system which perpetuates violent structures of oppression.