Izmir, International Law, and the Past and Present of Forced Migration 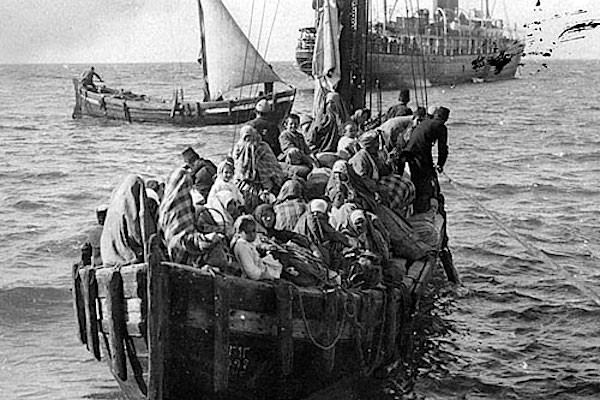 A group of refugees leave the Samanli-Dag Peninsula, on a boat they boarded with the help of the Turkish Red Crescent.
© ICRC

In September 1922, the city of Izmir served as the site of one of the most brutal episodes of forced migration of the early twentieth century. The event occurred toward the end of the 1919–22 Greek-Turkish War, a bloody and protracted struggle over western Anatolia that marked the culmination of the Ottoman Empire’s violent disintegration. The 1912–13 Balkan Wars, the First World War, the Armenian genocide, and a variety of related conflicts and massacres had already put to rest any hopes of a peaceful resolution of the “Eastern question”. The Greek-Turkish War capped this process, further destabilizing a deeply unstable region.

By late 1922, the war had proven enormously costly to Greeks and Turks alike. Atrocities had been committed by both armies, and much of the Anatolian hinterland had been razed to the ground. Nowhere, though, had the two camps’ ambitions been concentrated with greater ferocity than in regard to Izmir, a vibrant and cosmopolitan port city that was pivotal to the political economy of the eastern Mediterranean. Izmir was the centrepiece of both the British-backed Greek occupation of Asia Minor and the Soviet-supported Turkish nationalists’ drive to forge a nation-state on the ruins of the Ottoman Empire.

When Turkish troops seized Izmir from Greek forces in September 1922, the city’s Christian quarters were set on fire and much of its Greek and Armenian population was forced to flee. These movements were subsequently formalized in a treaty that called for a compulsory “exchange” of minority populations between Greece and Turkey. From 1922 to 1934, when the international commission set up to administer this treaty-based “exchange” was dissolved, over one million Greeks and roughly 350 000 Muslims were uprooted from their homes. The demographic composition and socio-political identity of each country was changed forever. And the precedent was later invoked elsewhere in order to legitimize dispossession and displacement along ethnic or religious lines. A notable case in point is that of Israel-Palestine during and after 1948.

Nearly a hundred years later, Izmir once again finds itself at the centre of the world’s attention on refugees, this time chiefly in connection with the civil war that has engulfed Syria. Among the roughly two million refugees currently in Turkey, growing numbers are finding their way to Izmir. The Greek islands of Chios, Lesbos, and Samos lie just off the coast, and refugees pay large sums of money to make the voyage to Europe on rafts, many of which are poorly constructed and highly unreliable. With local authorities paid off or looking the other way, smugglers profit handsomely, driving an informal economy that has injected capital into a country where growth has slowed and the burden of providing shelter and services to refugees has come at a high cost. It is of little concern to most smugglers, and the countless agents and intermediaries with whom they collaborate, that refugees do not always survive the voyage.

Of course, today’s mass migrations are structured and furthered through different legal means than those of the interwar period. Instead of expulsions that are subject to after-the-fact formalization or group-wide transfers that are implemented through treaty law, what we have in Izmir and other cities now are criminal enterprises that benefit from international efforts to restrict migration. Pursuant to a “readmission agreement” between Turkey and the EU, “irregular migrants” who have entered the EU may be returned to Turkey. Such agreements have recently been reinforced to augment migration controls. Perversely, though, it is precisely these and related legal instruments that bolster the power of smugglers in places like Izmir. Unable to access Europe through legal channels, many refugees are left with little choice but to rely upon the resources and expertise of traffickers.

The population transfer treaties of the early twentieth century fostered mass migration directly in the name of nation-building projects of one kind or another. Contemporary “readmission agreements” attempt to prevent illicit migration, but indirectly and somewhat unwittingly reinforce it by depriving many refugees of a viable alternative to smugglers. Indeed, while clearly very different in form, the substantive consequences of yesterday’s population transfer treaty and today’s “readmission agreement” are not entirely dissimilar: both engender forced migration. Perhaps, then, it should come as no surprise that Izmir, a city situated at the crossroads of different cultures and continents, continues to play a central role in the lives of refugees.

Itamar Mann is the national security law fellow at Georgetown University Law Centre. He is author of the forthcoming book Humanity at Sea: Maritime Migration and the Foundations of International Law (Cambridge University Press, 2016).

Umut Özsu is an assistant professor at the University of Manitoba Faculty of Law. He is the author of Formalizing Displacement: International Law and Population Transfers (Oxford University Press, 2015).