Towards a post-liberal theory of free expression 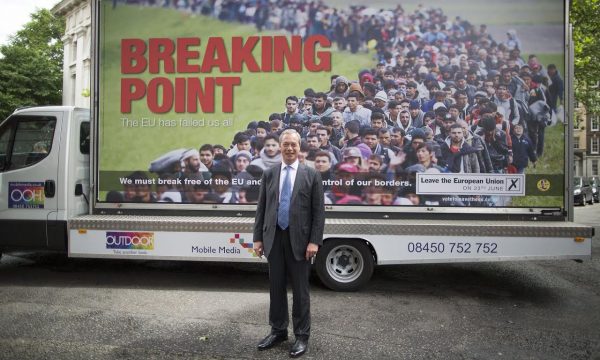 Controversies about free expression now saturate the news more than ever before.  They certainly erupt whenever Donald Trump opens his mouth.  Questions have also arisen as to whether anti-immigration slurs incited post-Brexit attacks on minorities.  By ‘expression’ I mean not only words, but also other expressive conduct—whatever messages the burkini sends, it’s causing the French to re-think their whole constitution.

Debates about free expression often divide along clear lines.  At one end, an established civil libertarian tradition inevitably applies some version of John Stuart Mill’s familiar harm principle (even when its adherents don’t use the phrase and haven’t read Mill).  Law, they claim, must always assume the background norm of free expression.  That default position may be overridden only when some palpable risk of harm can be demonstrated, something more than ‘mere’ offense.  The law must not penalise the sheer expression of repugnant ideas.

Such an approach is commonly called ‘liberal’.  However, that label now covers such different meanings that phrases like ‘civil libertarian’ or ‘classically liberal’ are used to avoid confusion.  Civil libertarianism once stood as the obviously progressive stance.  Throughout much of European history it had been conservative forces of monarchy and church that were censoring provocative views.  In the early and mid-20th centuries heavy censorship continued to be associated with dictatorial regimes.  Yet distinctions between democracy and dictatorship were already blurring.  States liberal in principle contradicted their declared values in practice.  African-Americans in Southern US states spoke ‘freely’ only at great risk to their lives and to their families, with scant protection from the law.  Other ethnic minorities, along with women or sexual minorities, fared little better.

Since the late 20th century, post-colonial, black empowerment, radical feminist, queer, and other critical movements have waged forceful challenges to the civil libertarian tradition.  Their advocates have questioned the classical liberal assumption that all citizens can speak with equal voices within an open ‘marketplace of ideas’.  White, middle-class, patriarchal and hetero-normative interests, they argue, inherently prevail through unequal arrangements of power, wealth, and influence.

For Stanley Fish, the whole idea of ‘free’ speech remains a seminar-room fiction.  It knows no real counterpart in the fabric of everyday life, which places endless constraints on expression.  Rae Langton, although working within Anglo-American linguistic performativity theory, has developed a strikingly Foucauldian view of language as a medium existing not distinct from the social world, but rather actively constructing and recapitulating power differentials.

Voices within those critical movements have not, however, been uniform.  In Excitable Speech, Judith Butler turns the leftist concern with unequal power on its head.  In the spirit of the master-slave dialectic (recalling her early interest in Hegel), Butler argues that the provocations of offensive speech need not keep their target groups subordinated, but can instead serve to mobilise and to empower those groups.  Excitable Speech has certainly enjoyed a respectable readership.  Now nearing its 20th birthday, however, it has attracted noticeably less attention than Butler’s other major endeavours.

Raoul Vaneigem, veteran situationist and erstwhile collaborator of Guy Debord, fares little better.  To situate Vaneigem’s view within his longstanding critiques of capitalism, let’s first turn back to Mill.  Mill’s harm principle had emerged in tandem with such movements as 19th century laissez-faire economics, Herbert Spencer’s ‘social’ Darwinism, and scientific positivism.  Those trends rallied to serve a crucial postulate: competition among, respectively, market forces, social forces, and empirical forces generate the greatest long-term truth and prosperity.  In On Liberty (1859), Mill deems that same free competition among opinions to be equally conducive to those goals.

Those parallel currents peak well before the great market crises of the 1930s.  After that turmoil, government regulation recaptures its role as a necessary market actor, particularly within socially progressive schools.  The analogy to free expression ultimately follows suit.  By the post-World War II period, progressives increasingly believe that the state must balance opinions just as it must balance markets.

From that starting point, Vaneigem, too, seeks to turn a leftist orthodoxy on its head.  In Rien n’est sacré, tout peut se dire, Vaneigem gallops far beyond conventional liberalism, towards a quasi-anarchic rejection of speech codes.  He continues to insist that we conquer capitalism’s illusory freedoms, which generate cultural com­modification, individual homogenisation, and socio-economic hierarchy.  For Vaneigem, however, a commitment to free expression serves not the perpetuation of market ideology, but, to the contrary, offers our best weapon against its grip on us.  To absolutise and thereby to anarchise expression is to break precisely the kind of social regimentation imposed not only by governments but also by markets.  Over a decade after its publication, however, that book remains scarcely commented and indeed untranslated.

Joining Butler and Vaneigem, Slavoj Žižek expresses doubts about speech regulation, albeit mostly to fuel his polemic against that nebulous bogeyman ‘political correctness’.  None of these three writers takes specific positions on preserving or replacing specific legal norms—and yet in that respect they’re in distinguished company.  After all, Foucault’s depictions of discourse as power have certainly spurred advocates of regulation.  Yet it is hard to reconcile viewpoint-selective censorship with that parrhēsia – direct, unabashed frankness, irrespective of a message’s stupidity, danger, or effects on others – cherished in Foucault’s Le gouvernement de soi et des autres.  Foucault’s writing certainly embrace values critical of dominant institutions, but never does he elevate any other institutionally-grounded political value to such revered political status.

Vaneigem’s book never mentions Foucault yet displays both Foucauldian strands.  On the one hand, Vaneigem’s depiction of market hegemony promoted through mediatised dissemination could have been penned verbatim by Foucault.  On the other hand, Vaneigem’s strategy is not to acquiesce to the regulatory state, but to liberate free, public expression from its grasp.

The ambiguities don’t stop there.  Conversely to Foucault, John Rawls is often invoked against speech codes in view of his strong commitment to classical civil liberties.  Yet Rawls, like Foucault, never stakes out any express position.  Other scholars, notably Jeremy Waldron, just as confidently invoke Rawls’s civility principles to defend controls on speech.  Yet the most puzzling figure of all is Jürgen Habermas.  Habermas’s lifework is constantly about discourse and power.  Unlike Rawls or Foucault, moreover, Habermas has lived well into the era of extreme speech as we know it today, including its electronic incarnations.  However, Habermas too, issuing no clear pronouncement, ends up cited on all sides.

Notable African-American scholars like Harvard’s Henry Louis Gates, Jr. and Randall Kennedy have added doubts of their own about speech codes.  Still, some observers would question whether they do so from progressive perspectives.  Both men have distanced themselves from strong leftist positions, often embracing more traditional, civil-libertarian policies.

So far that’s quite a line-up of writers, yet we’re all as confused as we were before.  Could it be that we’re having the wrong argument, an argument overly defined by the terms of 18th century liberalism?  Even those who challenge that paradigm often end up entrenching it by viewing classical liberalism as the prime target, as the only real philosophy propelling opposition to speech codes.

Surely Butler and Vaneigem prove that such an assumption is no longer true.  The foregoing chronicle makes at least one point clear: both historically and still today, it would be misleading to brand opposition to codes as politically regressive and support for them as politically progressive.  Perspectives across the spectrum have long correlated to both positions.  Robert Post, among the most influential opponents of bans, has complained that the American left’s support for viewpoint-selective regulations has allowed the right to steer free speech jurisprudence away from the political realm, towards sheer market deregulation (most perniciously when the US Supreme Court’s right-wing Justices voted to strike down laws limiting campaign contributions.[1.Citizens United v. Federal Election Commission, 558 U.S. 310 (2010).])

Amidst the ‘No Platforming’ controversies that have raged on several campuses, I recently attended a meeting at a prominent British university.  A working group had been formed to condemn the trend.  I was invited because I oppose ‘No Platforming’ approaches.  More generally, I oppose the bans on offensive or extreme speech in force in most democracies.  (I don’t oppose bans for all cultures at all times.  But I’ll leave that point aside for now.)  Because I take anti-ban positions, I end up invited to these events on the assumption that I’ll present a traditional, civil libertarian view.  Classical liberalism, it is assumed, necessarily entails opposition to bans, and opposition to bans necessarily entails classical liberalism.

The organisers circulated a model policy statement with the aim of submitting it for incorporation as official university policy.  Yet it seemed almost literally cut-and-pasted from Chapter 2 of Mill’s On Liberty, as if social dynamics had in no important respect moved on since the mid-19th century.  The group by no means included only middle-class white males.  I have no doubt that its members felt otherwise committed to a university open to staff and students of all backgrounds.  Still, the draft – and the group members – failed to acknowledge even obliquely the genuine worries about free expression that were being voiced on university campuses, even if the group rightly wished to propose an anti-censorship solution.

I objected to that approach and was greeted by blank stares.  After a dead silence, the only response was, ‘I really don’t think we need to pander to them.’ – ‘To pander’, as if ‘they’ were the enemy rather than partners in the values our group claimed to be promoting, namely, open and constructive dialogue.  The group was well-intentioned, but were clearly no fans of, in the Athenian sense, dialectical reason.  And as Plato and Aristotle tirelessly remind us, free speech without dialectic is nothing more than self-gratifying rhetoric.

And so I saw the necessity of moving beyond the terms of a classical liberalism which no longer serves either side.  Butler and Vaneigem point beyond the hackneyed dualism of either affirming free expression solely in the form of a conventional liberal ‘right’ or challenging free expression in the form of what have become equally conventional critiques of classical liberalism.

When Mill was advocating free speech his target was the dominant institutions of power, not socio-economically subordinated groups.  Given his views on other social issues (and the exceptions he adumbrates to the rule of free speech), it is by no means clear that his position today would be as absolutist as writers on all sides have long assumed him to be.  Mill has become one side’s straw man and the other side’s straw hero.  Tracing as far back as Rousseau, passing via Marx, it will come as no surprise to students of critical theory that liberalism and democracy have never been perfectly coextensive, and phrases like ‘liberal democracy’ all too readily conflate them.  In much of the writing on free speech those two concepts still remain hopelessly confused.

A stubborn error is the assumption that we opponents of bans are insisting that the state remain value-neutral.  No state, of course, can ever be value neutral, nor should it try.  Leaving aside extreme libertarians (whose minimal state would equally fail to be value-neutral), no leading opponent of bans assumes any such thing.  Civil libertarians like Post or James Weinstein insist on active state intervention against discrimination and aimed at promoting pluralist norms and practices.  The line they draw, however, is that a democracy cannot legitimately penalise citizens who dissent, even crudely, from that pluralist ethos.

I do not see a post-liberal approach as a crisply defined position aimed at a single normative outcome.  Such an approach could, however, avoid untenable distinctions between progressive and regressive, between right and left, between liberal and critical.

Eric Heinze is Professor of Law and Humanities at the School of Law Queen Mary, University of London