Give back the Gweagal shield

Even if you are a regular visitor at the British Museum, you probably haven’t noticed the Gweagal shield. It hangs on a hoall of the ‘Enlightenment’ room, a long regal chamber lined with glass cabinets and dotted with shiny white busts of colonial explorers. It has the feel of an imperial trophy cabinet, displaying a large collection of unrelated objects from taxidermied rare birds, to Chinese porcelain bowls, Ancient Egyptian and Greek statues, Roman jugs, Native American totem poles, Maori tikis, fossils, shells and the jaw of an extinct elephant. The Gweagal shield is wedged to the wall by nails in a cabinet at the far end of the room, hovering above this brief explanation: 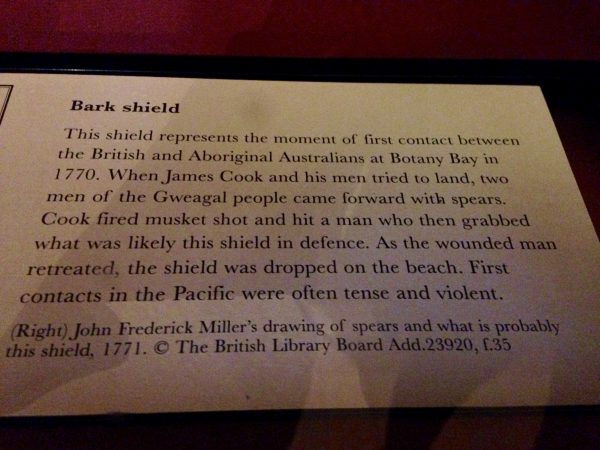 ‘Bark Shield: This shield represents the moment of first contact between the British and Aboriginal Australians at Botany Bay in 1770. When James Cook and his men tried to land, two men of the Gweagal people came forward with spears. Cook fired musket shot and hit a man who then grabbed what was likely this shield in defence. As the wounded man retreated the shield was dropped on the beach. First contacts in the Pacific were often tense and violent’ (Photo by Sarah Keenan, 2016)

This thin and banal description hides a history of genocide and remarkable resistance. This moment of ‘first contact’ was a violent and racist invasion of the oldest surviving civilisation on earth, an invasion that continues to this day. The day that Cook arrived, Aboriginal Australians had been in effectively exclusive occupation of the land for 60,000 years. Today they are 3% of the Australian population, many living in conditions of abject poverty unthinkable to non-Aboriginal Australians. Aboriginal Australians have an average life expectancy 10 years shorter than non-Aboriginal Australians, and they are grossly overrepresented in Australian prisons, where even their children are tortured. Tucked away in this British Museum room with a generic name and brief explanation, the Gweagal shield is almost as well hidden as the history of violence and resistance it represents.

If you look closely, you can see a hole that pierces the Gweagal shield clean through its centre. A visit to the British Museum won’t give you any further information about the shield or why it is pierced, but Rodney Kelly can tell you the full story. Kelly is a Gweagal man, a descendent of the warrior Cooman who stood on the beach at what is today known as Botany Bay, Sydney, and used the shield to defend himself against Cook’s bullets on that fateful day in April 1770. Kelly has travelled to London seeking the repatriation of the Gweagal shield. This long, expensive trip to Britain marks Kelly’s first out of Australia and his first time on an aeroplane.

I meet with Kelly, together with Mutitjulu elder, Vincent Forrester, and Roxley Foley of the Aboriginal Tent Embassy, in my office at Birkbeck Law School. As we speak, I am acutely aware that the shield is just around the corner in the British Museum, and yet Kelly cannot simply take it home. Last week in a meeting with the deputy director of the British Museum and a number of curators, Kelly made a formal request for the return of the shield to the Gweagal people. I asked him why its repatriation meant so much to him.

RK: Because my family, my people have been dispossessed of their land and their culture. We’ve lost our language and our ceremony and all of that. I grew up on an Aboriginal reserve where we were just all put, and I didn’t know who I was or where I came from. But I grew up hearing stories about being there with Captain Cook, and once I got older I started to think about all that and wanted to find out who I was and where I came from. So I started researching and found that loads of old historians had written about my family members.

Kelly explains that his ancestor Cooman, together with another Gweagal warrior, stood on the beach that day in 1770 and opposed Cook’s landing. Cook shot at the men a number of times, ultimately hitting Cooman, who dropped the shield on the beach. Cook later came to shore, picked up the shield and brought it back to England. Britain has stolen a lot from Aboriginal Australians. As Kelly explains in his letter to the British Museum, since that day on the beach, Aboriginal Australians have lost their land, their language, their health and their culture. The Gweagal shield is something that a contemporary British institution can actually give back.

RK: The British Museum must realise that this sacred object still has vital and imperative cultural work to do in Australia. The healing power that this shield has for Aboriginal Australia is much greater than any value it can have as part of a collection in the British Museum.

The first time Kelly saw the Gweagal shield was when it was on loan to the National Museum of Australia in Canberra earlier this year. There, he felt for himself the healing power of this enormously significant cultural object.

RK: It was the 28th of March, the last day of the exhibition. It was a good day that day. It was emotional. We got to see it twice. My Mum was there and my aunty. Seeing it in Australia, we felt proud to see it there. It was an awesome display.

As well as its cultural significance to the Gweagal people, the shield has the power to instil renewed pride into Aboriginal people and to educate non-Aboriginal Australians because it is physical proof of the lie of terra nullius. Australia was founded on the racist understanding that the land was empty, belonging to no one, Aboriginal people being regarded as too ‘backward’, ‘barbarous’ and ‘low in the scale of social organisation’ to warrant recognition as properly human. As such, they could be treated as part of the natural landscape that Britain claimed to have ‘discovered’. British sovereignty over and possession of this expansive land was taken on the basis that it was uninhabited. Although terra nullius was overturned by Australian judges in 1992, its legacy lives on in the national psyche. The Australian government’s persistent stream of policies removing Aboriginal people from their land is possible because they continue to be treated as less than human. This racism is internalised by Aboriginal people. The suicide rate among young Aboriginal men today is the highest in the world. The Gweagal shield not only proves pre-colonial Aboriginal connection with land, it also makes clear their long history of resistance to British colonisation, from the very first act of violence they faced on the beach at Botany Bay.

For Kelly, seeing the shield back in its permanent position in the Enlightenment room at the British Museum was a very different experience from seeing it in Australia.

RK: I felt insulted and angry. They don’t respect it. The amount of rods that hold it in place are doing damage to the shield. People walk past it everyday and don’t look at it, don’t know the significance of it. You can’t see the back of it, which is important. It’s disappointing to see it like that. When it was in the museum in Canberra it had an awesome cabinet, had a video behind it [showing footage of the Sydney beach where the 1770 battle took place], you could walk around it and see the shield properly. At the British Museum people just look at the front and walk past if they even notice it.

I asked Kelly whether the British Museum’s possession and treatment of the shield was in line with Gweagal law.

Rodney Kelly viewing the Gweagal shield at the BM, credit to @sovereignmbc

RK: Cooman’s grandson was destined to hold that shield, and then his grandson, and so on. It’s breaking the law taking the shield off the land without the proper protocols.

Returning the Gweagal shield to Sydney would be repatriating it to the place from which it was originally stolen. There, Sydney Museum have indicated that they are willing to enter a legal arrangement with the Gweagal people regarding the proper care and storage of their shield.

Roxley Foley: Sydney is the shield’s rightful resting place. The Sydney Museum are happy to be the institution to keep it until we can have an Aboriginal cultural centre. We want our culture to be presented properly and not just as a dead culture.

Days after Kelly’s meeting at the British Museum, the deputy director Jonathan Williams wrote a generic response which failed to acknowledge Kelly as having any rights to the shield. By refusing to recognise the shield as the property of the Gweagal people, and by placing it in a room with dead specimens from ‘the natural world’ and the spoils of British ‘discovery’, the British Museum is reproducing the lie of terra nullius.

Vincent Forrester: The biggest symbol that Australia has is that shield. It affects questions of sovereignty and treaty. Look through the bullet-hole in that shield, and fast forward in time… you can see how this state-sponsored abuse is connected.

Modern Australia began with a British bullet fired through the Gweagal shield. After 246 years, it is time Britain and Australia acknowledged their histories, and allowed Aboriginal Australians to rebuild theirs. A good starting point would be for the British Museum to give back the Gweagal shield. As Rodney Kelly says, “Our shield deserves to be at home where it can help repair our history and start telling the true story of Botany Bay, where modern Australia started and started to go wrong.”