No Alarms and No Surprises? Sixth Protester Dies in Turkish Demonstrations 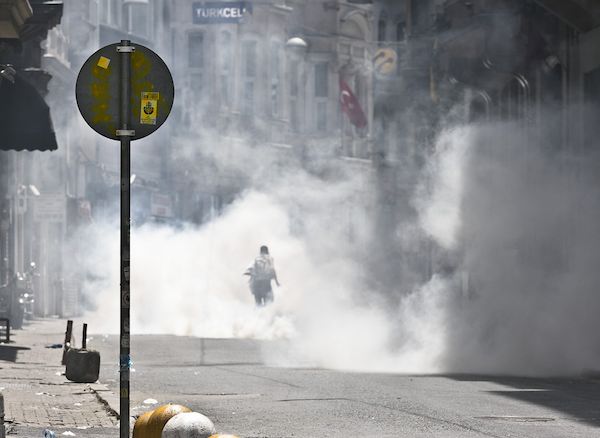 Even though the international fascination with the Turkish protests seems to have somewhat faded, they have continued since last May. The demonstrators are neither tired of gathering together nor deterred by the tear gas and the water cannons used unsparingly by the police.  Extreme police violence, which marked these events, also continues and the police have shown an equally (if not more) enthusiastic attitude to use force on people who were officially deemed a ‘handful of vandals’ or ‘a small group of marginals apparently manipulated by a sinister external terrorist organisation’, an organisation whose identity to this day remains a mystery.

When 22-year old Ahmet Atakan died on September 9 during a demonstration, it was no surprise that state officials refused any responsibility for his death. He was protesting against the police violence which had already caused the death of five people. Atakan became the sixth victim of this violence. There were conflicting explanations and an awkward denial about his death by the state officials. Unfortunately, his death did not come as a surprise to anyone, no matter how dreadful it was to hear about it. Yes, there were immediate protests by the public, yet sadly enough, we know now that if you join these demonstrations you can get seriously injured, lose an eye, and even lose your life. Worse still, Ahmet Atakan will probably not be the last person to lose his or her life in a demonstration in Turkey under the current circumstances.

I will not go into the statistical details about the number of people physically affected during the protests. What really concerns me is the normalisation of this violence. No matter how impossible it is for us to accept the deaths, they are happening in the public eye, making it impossible to escape from it. As the demonstrations almost become part of daily life, violence does too. Under these circumstances, I feel that even though the latest protests sparked a lot of hope for Turkish society, with a significant number of people dying on the streets, what is gained is incommensurable with what is lost. To an extent, with lives lost to violence in such a tragic way, what is lost becomes more than human life. It seems as if the boundaries of the ‘right to live/exist’ in Turkey are also shifting with each death. It is as if someone is whispering in our ears: “Hello!? If you are to deserve to live in Turkey you have to play by the rules — those rules have long been changing.” Now, what does that change for and in us?

By now, it has become obvious that the protests are about wider socio-political concerns within Turkish society. The most common approach is to frame these within a picture of cultural polarity between secular classes and Islamists who oppose modernity and the secularisation process. It is no wonder that this polarisation is highly relevant in thinking about the atmosphere of discontent in Turkey, especially when we think about issues such as the limitation of reproductive rights, freedom of speech etc. However, when considering the police violence and the ease within which this violence is justified, framing the whole Turkish issue around this polarization seems inadequate, at least theoretically, as it can be seen as contributing to a kind of normalisation in itself. Here, we have to do something more than to treat state violence as inescapable.

Within the Turkish context, Agamben’s idea of ‘bare life’ can be used to explain such extreme state violence without treating it as either inescapable or as an anti-human anomaly. In Homo Sacer and Bare Life, Agamben explains the transformation from a liberal rule to an authoritarian one and vice versa by the intrusion of biological space into politics.1Agamben, Homo Sacer: Sovereign Power and Bare Life (Stanford: Stanford University Press, 1995). This has to do with the extent to which human life becomes an object of the power in governance. According to his idea, the more of an intersection there is between life and politics, the more obscure the liberal/authoritarian division becomes. Building on Foucault’s biopolitics and Carl Schmitt’s idea of the ‘state of exception’, Agamben elaborates the restrictions of democracy and social exclusion through the division between the state of exception and the state of normality. This division can be interpreted from the perspective of the legitimisation of certain practices for those who are demoted to ‘bare life’ — a depoliticised form of life.

According to Agamben, bare life is Homo Sacer,2Agamben, Homo Sacer, 8. a key to sovereignty: ‘an obscure figure of archaic Roman law, in which human life is included in the juridical order solely in the form of its exclusion (that is of its capacity to be killed)’.3Agamben, Homo Sacer, 11. Agamben claims that today, bare life remains included in politics in the form of the exception, as something that is included solely through an exclusion. The Turkish events are a good example of this exception. The protesters symbolise the bare life that is essential for sovereignty, that is, the mere life that has no human or socially recognized status and that needs to be constantly separated, expelled, so that the bios can be recognized as ‘human’ and be protected by the legal and the social order.4Giorgi and Pinkus, “Zones of exception,” 100. In other words, by entering the protest zone the protesters become bare lives with the possibility to be killed although they are officially not condemned to death. Within this framework the police violence corresponds to the conceptual area of ‘indistinction between violence and right that is exactly symmetrical to that sovereignty’.5Giorgio Agamben, Means without end: Notes on politics (Minneapolis: University of Minnesota Press, 2000), 103. In other words, protestors find themselves in a zone of exception within which they are deemed without any value and relevance by political power. Summing it up, they can be killed and their killers will not be regarded as murderers.

The number of people that were injured or that died during these protests, despite the peaceful nature of the demonstrations, and the silence of the politicians in the face of these causalities, give important clues about the kind of bare life produced within the Turkish context. If we look at some of the dominant and official discourses of identity, which construct the protesters as an undeserving or worthless crowd, we can better understand how this ambivalent split or division between those who are excluded and included operates. This space not only signifies the absence of law, it also represents a symbolic zone of ‘dipolarity,’ a zone of ‘indifference and indecidability within which the protesters are subject to raw power.’6Ulrich Raulff,  “An Interview with Giorgio Agamben,” German Law Journal 5:5 (2004), 612. Once the space of exception is proclaimed by the sovereign, it is not surprising to see the police execute that raw power.  When protesters are framed in political discourses as outside of the norm/law, we reach a breaking point when considering the parameters of the right not to be exposed to violence.

Agamben’s conceptualisation of biopolitics and his understanding of the state of exception is useful in thinking about certain paradoxes of today’s society. Turkey is a good example of the materialisation of bare life as the social order is dislocated through aggressive neoliberal governance, something that would be worth investigating in a separate study. We have to look more closely at the politicisation of life to understand the aggressiveness of the police, because in Turkey, the violence arguably reflects a continuation of various other intrusions into the private sphere. It is important to ask ourselves where these intrusions start and end — from reproductive governmentality and the control of sexuality to the right to live. And after all isn’t taking a life the ultimate private intrusion?

We do not know how far the materialisation of bare life will go in Turkey. But before giving into violence and the imposition of its normative order, we should never fail to be shocked, stunned and jolted into thinking again in the face of such killing.