The Pandemic and Us: Enemy, Resistance, Desire 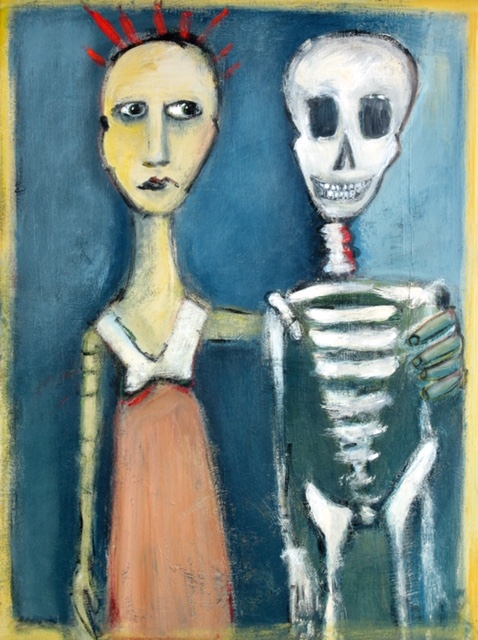 Jacquline Hurlbert, “Making Friends with the Enemy” (courtesy of the artist)

Much has already been written about the coronavirus’s impact on the legal phenomenon, as well as about the use of national laws in response to the contagion. In this post, I would like to pursue what David Graeber indicates as a compelling line of inquiry. Accordingly, I will consider three broad contemporary trends which law played a role in shaping, with a view to problematising their development in a time of pandemic.

Many analyses of the health crisis share a key commonality in the injunction to engage in acts of resistance and mobilisation. Catherine Connolly, for instance, argues that gestures of solidarity are badly needed to appease such forms of alienation as inevitably ensue from social distancing. Bruno Latour urges to oppose widespread calls for resuming pre-outbreak levels of production, a move which he considers ‘the last thing to do’. Jo Michell warns that a new wave of austerity measures looms on the horizon, as governments will attempt to offset coronavirus-driven spikes in public spending. We’d better get ready to fight, Michell suggests, and avoid being caught off guard as it occurred in the wake of the 2008 financial meltdown. Finally, Paul Preciado’s Foucauldian analysis points to the intensification of consumerism and biovigilance that the health crisis is prone to facilitate. To face that threat, Preciado recommends that we take advantage of social isolation to study the traditions of struggle which allowed us to survive until now.

As much as I agree with these postures, I believe a problem lies in the very possibility of organised resistance at the current juncture. According to Naomi Klein, the biggest risk we run is ‘frittering away this time sitting at home on our social media feeds’. Somehow addressing that point, Preciado invokes drastic countermeasures: let’s turn off mobile phones, disconnect from the internet and revel in a massive blackout. When coronavirus was on the rise in Italy, I myself took some weeks off the grid to elude what I considered a useless overexposure to dramatic news. But while succeeding as a personal expedient against anxiety, I doubt that a technological boycott is likely to embody a successful revolutionary act. ‘The revolution will not be televised, will be no re-run, the revolution will be live’, sang Gil Scott-Heron in the 1970s. Is this what he meant – everyone home by themselves, craving a live stream nobody will broadcast?

As Graeber notes, instances of popular unrest were multiplying before the outbreak (the case of Hong Kong being perhaps the most reported in western media). In the coming months, maybe years, the pandemic will continue offering reasonable grounds to forbid mass gatherings by means of national laws. More importantly, it is likely to discourage people from taking the streets to voice discontent. The question thus remains: what alternative forms can protest assume while remaining effective? As Stephen Hopgood noted in a 2013 book, under neoliberalism participatory activism has been largely supplanted by ‘slacktivism’ – an online surrogate which might very well not take place if only it was costlier. Is slacktivism going to save us, then? Can we redeem online mobilisation from its predicament? Otherwise, the solution could lie in orderly and supposedly contagion-proof rallies such as the one which took place in Tel Aviv last April. Yet, and I somewhat hope to be wrong, social distance and civil unrest seems to me hardly compatible with one another. An insurgency which looks like a flash mob is the ultimate nightmare of postmodernity. If not even revolution can escape the cultural logic of capitalism, Fredric Jameson was right all along.

Who is the enemy?

A further problem, as I see it, is the target of any mobilisation which pandemic-related developments might require. Despite having qualms about the type of Left politics whose resurgence she wishes to see, I agree with Chantal Mouffe that political action requires identifying and confronting an opponent (and no less than one). In this respect, I worry that the outbreak will contribute to blurring lines and confounding perception. First, there is the idea that the virus (contrary to, say, poverty) affects everyone and indiscriminately so – the nurse, the bus driver, the student, but also Olga Kurylenko, Boris Johnson, and Tom Hanks. (Yes, the web contains lists of celebrities who tested positive; and no, I am not going to link any.) Secondly and more importantly, coronavirus has risen to the status of ‘enemy of the people’, one of those red herrings which reactionary politicians cannot do without. In the west, it is well known that Communism discharged that role during the Cold War. Drugs, terrorism, unemployment have since fulfilled similar functions. Today, we are all united against another common villain: Covid-19.

I believe that we should not abuse that rhetorical device, for the coronavirus is an enemy in the same sense as old age is, or a car accident, or an earthquake. What matters is clearly how governments (did not) prepare for a pandemic, and what plans they will implement from now on to deal with it. When it comes to the legal plane, the risk is that we focus too much on those actions carrying the infamous ‘coronavirus’ label. An example: calling for the suspension of the EU Stability and Growth Pact, Italian MEP and former minister Carlo Calenda depicted the measure as a necessary step in the war against the virus. In war, said Calenda in a rather corny tweet, only the rule of winning applies. What this perspective seems to miss is that those same norms whose suspension Calenda now advocates, are arguably among the causes why so many segments of society (in Italy and elsewhere) proved overly vulnerable to a sudden health crisis.

Little more than a year ago, when Rutger Bregman made headlines for his intervention at Davos, many skated over Winnie Byanyima’s equally compelling remarks captured in the same video. (‘You’re counting the wrong things’ was her memorable answer to a former tech executive extolling the US’ unemployment rates, then at a historic low.) As Byanyima noted, billions of people worldwide live a medical bill away from indigence. In Italy, around one in four people are at risk of falling beyond the poverty line (compared to little over one in five in the EU). Under such circumstances, it is to be expected that any emergency – let alone a global pandemic – will have catastrophic effects, although to different extents depending on the region.

In this scenario, I tend to disagree with Anne Orford’s view that law makes the loser in any given dispute very visible. Unless the clash is a strictly judicial one (and even then, I would be sceptical about the statement’s persuasiveness), I believe that law can also conceal who the ultimate winner in a specific situation is. Again, it is great that the Italian government has adopted economic measures to support families and workers during this period. It remains true, however, that when every glitch in the system is potentially devastating for big chunks of the population, the enemy are all those social forces which keep the extant social order in place – and much more so than a viral infection.

Quite apart from issues concerning the forms which resistance should take and the subjects against whose impositions we want to resist, stands the question of what we aim to achieve by resisting. In turn, that query touches on our desires – many of which are stored in the unconscious, as Freud taught about a century ago. I think that the flurry of social distancing measures imposed across the world to contain the pandemic open interesting avenues for investigating the relationship between psychoanalysis and legal domain. In her monograph on the subject, Maria Aristodemou notes that law and desire can be mutually constitutive; ‘lack of prohibition leaves the subject’s desire with no cause around which to circulate’, but ‘for something to be prohibited, there must have been a desire to perform it in the first place’ (39).

Drawing on Aristodemou’s work, I would like to venture a hypothesis concerning the impact of coronavirus-driven restrictive measures on our unconscious. In doing so, I am leaving aside the fact that such measures do not apply equally across all segments of society, but rather reflect and magnify existing social inequalities. What I intend to bring into the equation, instead, is the other emergency which overshadows the pandemic crisis and cannot but bear some relation to the latter. Now, for most of us, nature becomes out of reach when we experience quarantine and similar restrictions. Accordingly, I wonder if such restrictions – should they become a recurring feature of everyday life – could get hold of our desire, thereby inciting unconscious mechanisms capable of moulding our collective posture towards the imminent climate catastrophe.

In Capitalism in the Web of Life, Jason Moore argues that the production of cheap nature is one of the main factors that capital accumulation invariably requires. Rather than understanding it in purely economic terms, Moore uses the adjective ‘cheap’ to indicate a lesser dignity afforded to a set of dominated subjects: women, colonised peoples, and, crucially for present purposes, the environment. A similar understanding of nature might be deeply ingrained in the worldview each and every one of us unconsciously cultivates, regardless of how progressive we consider ourselves to be. In fact, as Aristodemou notes following Slavoj Žižek, ideological mystification is alive and well in ‘our daily lives, infusing them with an imaginary dimension whose effects we are rarely conscious of.’ That holds true regardless of our knowing beliefs. Actually, ‘the fact that we pretend not to take [cultural] practices ‘seriously’ makes their ideological power even more efficient’ (52-53).

Given that law contributes to shaping our desires, a question thus emerges. If pandemic-related restrictions constitute nature as a forbidden space – at least much of it, at least for many, and at least for considerable periods of time – might that reshape our desires concerning nature in ways which have thus far remained precluded under capitalism? In particular, we may wonder if confinement in cramped living quarters will reignite a latent desire for communal environments beyond the boundaries of private property. Another way to look at this query is considering the concept of ‘fantasy’ in its psychoanalytical sense, which indicates those stories the unconscious weaves and comes to believe regarding ourselves and the surrounding world. In that connection, Aristodemou reminds us that legal reforms are not sufficient for meaningful change to take place. For change also requires ‘the shattering dissolution’ of the fantasies that support existing laws and policies (4). And a fantasy which we may have unwittingly clung to so far, posits nature as an entity which is always there for (most of) us, always and forever. Driven by the current pandemic and perhaps bound to return at irregular intervals, social distancing measures give us a taste of an unlivable world which – virus or not – will soon become a lasting reality. As Aristodemou convincingly notes, only major traumas can dislodge our hidden fantasies (105). If corona is not major enough, we should start bracing for what it will take.

Michele Tedeschini is a PhD candidate at the SOAS School of Law and a Teaching Assistant at the University of Manchester.