We are delighted to be launching the new website Crowded Sovereignty, and over the next few days we will be publishing the first three installments of this investigation of crowds, sovereignty, law and disorder. 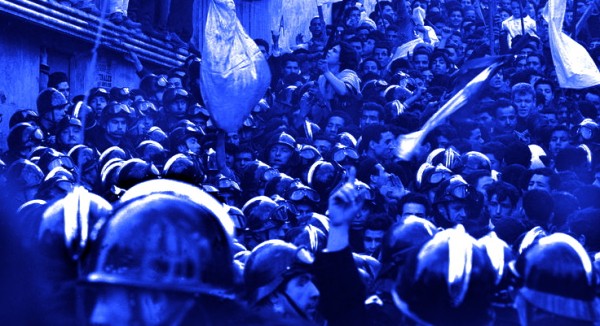 The crowd is not a technology or a subject of sovereignty. It is neither the ‘agent’ who could take, create or destroy sovereignty; nor a ‘means’ for others to become sovereign. The crowd is remarkable because of its prevalence and excision. It is often there in those paradigmatic moments of sovereignty, but generally maligned and denigrated. This site is designed to investigate the intuition that today the crowd presents a distinct way of thinking. Unlike the nation, people or proletariat, the crowd has remained something to be reviled, and as such it remains unburdened by the weight of idealisation. The crowd is crucial, but not in its rationality, its wisdom or its possibilities to provide capital efficiently. As Freud or Canetti saw clearly, it is a protean and affective co-presence, whose dynamics are crucial to both everyday and spectacular politics.

The project is called Crowded Sovereignty, as it is not simply a matter of crowds. Sovereignty is most often imagined in uncrowded scenes. Time and space are usually presupposed. Even in the crazy moment of decision, brought on by some crisis, the sovereign seems to pause before the leap. Sovereignty is usually thought of as lonely words of decision from the majestic and terrific One, or a hubub of the few selected by representation or status. But in these sovereign scenes there is order and regularity, irrespective of whether they produce something pure and pristine, or blood, torment and wretchedness. This project wants to think about the everyday and cacophanous moments when sovereignty is crowded out, shouted down or silently subtracted. In this sense, it comes at the juncture of three themes:

The project, at this stage is less a fully worked out process with stages and findings, than a disordered crowd of ideas, leads and reflections. I hope you will join me in developing it.

Details of the Crowded Sovereignty Porject can be found here, along with all previous posts.