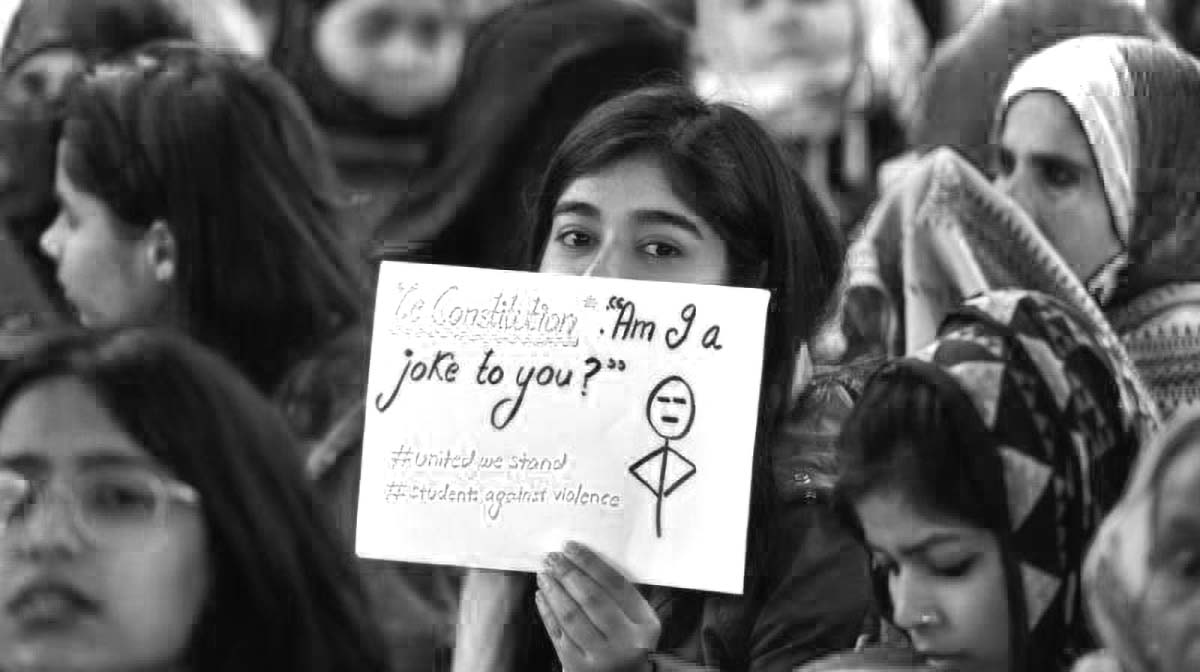 “We need Covid Trials. In an international court,” is Arundhati Roy’s “post-lockdown reverie”. She wants the Indian government to be held accountable for its treatment of migrant workers as refuse and the ongoing assault on the civil rights of dissenters in the wake of Covid-19. Roy’s wishful faith in an international justice delivery mechanism to establish state accountability captures the double bind (à la Spivak) of postcolonial liberalism well: relying on the perceived “rational universality” of international law’s (and by extension common law’s) promises of protecting the human rights to liberty, freedom and equality, when a postcolonial state—especially its judiciary—fails to do so, despite a progressive constitution. It is a double bind because this reliance operates with the awareness of international and the common laws’ colonial and racist pasts and presents.

But why should it be a matter of concern if recourse to the putative universalism of liberty, freedom, or equality can advance calls for justice and an end to state impunity? Isn’t the commitment to these ideas—also enshrined in the Constitution—that make India modern, secular and progressive? Are there dangers in holding on to liberty’s promise as a normative good? Might the Constitution’s promise of liberty—that marks a break from the coloniser’s denial of subjecthood to the native—mask and justify exclusion and violence in the postcolony today?

Liberty can be understood as an individual’s right to do what they want to do (even to their own peril). This right cannot be infringed upon by the state. The state can stop someone from doing something only if that action carries the possibility of harming others. John Stuart Mill (who also worked for the British East India Company) wrote On Liberty in 1859 to develop a rival to the then prevailing idea of Westphalian state sovereignty. For Mill, it was not just the political entity called the state but also the individual who was sovereign. Such sovereignty over the individual’s “mind and body” was “absolute”.

Mill introduced into modern law what is referred to as the “harm principle” that imposes limits on the state’s paternalistic authority over the lives and conduct of its citizens. The fundamental rights provisions in the Indian Constitution follow the logic of the harm principle, in that they uphold the sovereignty of the individual by imposing both negative and positive responsibilities on the state. The judicial reasoning that informs recent progressive decisions of the Supreme Court—particularly Puttaswamy (right to privacy) and Navtej Johar (decriminalizing adult, consensual and private sex) rely heavily on the harm principle.

For Mill though, those who were a part of “backward states of society in which the race itself may be considered as in its nonage,” can be denied individual sovereignty. Writing after the Sepoy Mutiny of 1857, Mill seemed to be punishing the subordinated non-Europeans of a lesser race for their insurrectionary temerity. Those races in their nonage—infantile and without history—are called “barbarians” by Mill, can be ruled through “despotism”. Mill, however, was not suggesting a perpetual denial. Once the barbarians are “improved”—civilized—through the justified means of a despotic “mode of government” they will be allowed access to the fruits of liberty. Liberty is thus made conditional upon the ability of the non-European to learn and mimic European ways. And even if the non-Europeans were to behave like Europeans, liberty could still be denied because they will always be racially lacking. This state of deferral is what Dipesh Chakrabarty has called the “waiting room of history”—to which the non-European aspiring for access to the fruits of liberty are relegated.

This well-rehearsed critique of 19th century British liberal thought is relevant for understanding governance practices of postcolonial democracies where, for Ratna Kapur, exclusion has become “inherent to liberalism, while the terms of inclusion, demand the erasure of difference.” From the vantage of the hybridity of “our modernity” in India, we thus confront a double bind. The very ideas that are at the heart of the emancipatory promise of the Constitution—liberty, freedom and equality—can be traced back to an intellectual tradition that was progressive and racist. Of course, one can argue that these values can be appreciated independent of Mill’s racism—and that is what the founders intended to cultivate the faith of common citizens in the Constitution’s morality.

Yet, even if we take Mill out of the equation, the way in which the idea of freedom is understood in independent India follows the exclusionary logic of liberalism. To do this, Indian postcoloniality, as Upendra Baxi has observed, “skillfully combines both the rule of law and the reign of terror into the hegemonic tasks and apparatuses of government.” For this reason, special security laws that give the state exceptional powers of surveillance, arrests, detention, and interrogation are constitutionally valid even if their arbitrary implementation compromises on the freedoms of citizens. Liberal state craft can justify arbitrariness when these laws deny perceived bad citizen access to their civil liberties in the name of national security to protect the good citizen from coming in harm’s way.

Consider Article 22 of the Constitution of India, which guarantees the rights of an arrested person (read with Article 20). This right is supplemented by several judgments expanding the scope of the right to life under Article 21. But in clause 3 of Article 22, the Constitution makes an exception for two categories of people whose rights on being arrested can be suspended: “enemy aliens” and those arrested under preventive detention laws. Access to the benefits of a civil rights guarantee is made conditional upon an intelligibly classifiable category of the good citizen in the nationalist as opposed to the alien, enemy, or anti-national—and one can be denied protection of the right to equality under Article 14 because of the incommensurability of these categories.

The logic of liberalism is thus activated. Race is supplemented by an imaginary construct of the ‘terrorist’ Other in the enemy alien (mostly the Muslim) or the ideological labeling of dissenters as ‘anti-national’ (mostly Ambedkarites and Communists) arrested under a preventive detention law like the current version of the Unlawful Activities (Prevention) Act (originally brought in by the Congress government). A spate of recent arrests of activists, academics, and students who had protested the deeply exclusionary Citizenship (Amendment) Act (CAA) are being carried out under the cover of the ongoing lockdown. Enacted by the Hindu Nationalist BJP, the CAA extends political asylum for religious persecution in select South Asian countries by conspicuously excluding Muslims—who in their Bangladeshi migrant avatar have been called “termites” by the BJP, because the underlining ideology of the law is that India is mythically the Holy Land of Hindus.

Those labeled anti-nationals and arrested by the current proto-fascist disposition—G.S. Saibaba, Anand Teltumbde, Sudha Bharadwaj, Rona Wilson, Gautam Navlakha, Arun Ferreira, Vernon Gonsalves, Sharjeel Imam, Safoora Zargar, Natasha Narwal, Devangana Kalita, and the countless other unnamed Muslim, Adivasi and Dalit citizens of India—are relegated to a more violent waiting room: the carceral captivity of the prison. In relation to the February 2020 violence in Delhi, the police’s modus operandi for arrests have been to specifically target Muslims  as protestors and instigators, while Hindu right wing leaders who spewed hate roam free.

In the case of liberalism lite an exit from this waiting room might still be possible once its inhabitants behave as per the terms of the state by letting go of their difference to assimilate into a projected ethos of liberal and secular Hindu universality—like Muslim women demanding the abolition of the Triple Talaq and the Hindu right wing state obliging with precision swiftness. However, when relegated to the prison as waiting room, the anti-national can be tortured with tacit constitutional and democratic sanction (or extrajudicially executed). India has not ratified the UN Convention Against Torture or enacted a national law against torture. The Supreme Court of India, despite a long history of judicial activism and progressive interpretations of the right to life, has never declared unconstitutional any preventive detention law including the draconian operation of the Public Safety Act in Kashmir and the Armed Forces Special Powers Act in Manipur, and retains and awards the capital punishment in the most discriminatory of ways. When not apprehended by the police, the anti-national in the beef eating Muslim or Dalit citizen, or the Muslim or Dalit man who gets romantically involved with a Hindu or an upper caste woman, can be lynched by Hindu vigilante groups aided by a state-community-technology complex.

In another perverse dimension of postcolonial liberalism in India, inclusion is being operationalized in Kashmir through a combination of brute military force, ‘disappearances’, and promises of “settlements modeled after Israel,” in the name of extending all fundamental rights to those who have been demanding azaadi from (and not within) India. With the abrogation of Article 370 in August 2019 (that had historically granted special status to the state of Jammu and Kashmir to have its own constitution), Kashmiris have been hurled into the inferno of a “one nation, one constitution” rule on gunpoint, where their right to political and cultural self-determination has been extinguished through executive fiat. But even after doing that—Kashmiris, now coerced to be Indian—cannot claim the guarantee of the right to privacy recognized in Puttaswamy because they are existentially suspect citizens who will remain cartographically captive within the waiting room of the Indian state’s violent borders, under constant surveillance, cut off from communication, in a perpetual state of exception. Any demand for privacy by the Kashmiri will be read as conspiracy against the “imaginary institution of India”. Even the gains of Navtej Johar are being used as a “homonationalist” justification for  India’s occupation of Kashmir so that Kashmiri queers can now enjoy the putative freedom that Indian democracy has benevolently bestowed upon them.

As Shruti Kapila says of these times: “Hindu nationalism is subsuming the law… Indian democracy has overwhelmed its constitution.” Perhaps Roy’s wishful recourse to international law can be read as a call for heightened vigilance against Hindu supremacist positions that are co-opting the language of decolonization to not reject but Brahminize liberalism by drawing on narratives of an untainted precolonial Indian past that is purely Hindu. But liberalism—whether it is the progressive, centrist or the conservative advocating it—is medicine for the powerful and poison for the marginalized, it kills and maims the anti-national in the dissenter, the racialized outsider and pollutant in the Muslim and the Dalit. And as we have seen amidst the Covid-19 lockdown in India, disposable migrant workers forced out into the streets are locked out of experiencing even the magic realist aura of postcolonial liberalism’s waiting room.

The liberalism of the Constitution of India protects the might and rights its nationalist bourgeois-Savarna citizens; it “takes the paradoxical form of inclusion [of the marginalized] and unspeakable violence [against them].” That is the unapologetic plainness of its promise. Postcolonial liberalism of a Hindu Nationalist India is a “war machine” where the state is both a “political organization and a mercantile company. It operates through capture and depredations.” And yet, those on the left-secular-feminist-queer-anti-caste-crip spectrum who claim to see through liberalism’s betrayals still retain mystical faith in its transformative authority—such is our “cruel optimism”: where the normative good that we desire for the marginalized—rights, freedom, equality—“is actually an obstacle to [their] flourishing.”

This is the double bind of our postcolonial condition—the contradictory inheritances and instructions that we are condemned to live and die with. And those relegated to the waiting room—forced to be atmanirbhar or responsibilized for being the sovreign agents of their own harm—will live more precarious lives and die more brutal deaths as the malignant march of postcolonial liberalism in Hindu nationalist India advances, built on the benign languages of human rights, development, and justice, and the broken bodies of its untouchable and “unpeopled” citizens.

A luta continua? Certainly. A vitória é certa? I doubt. I

Oishik Sircar teaches at the Jindal Global Law School and is the author of Violent Modernities: Cultural Lives of Law in the New India (forthcoming in October 2020 from Oxford University Press).