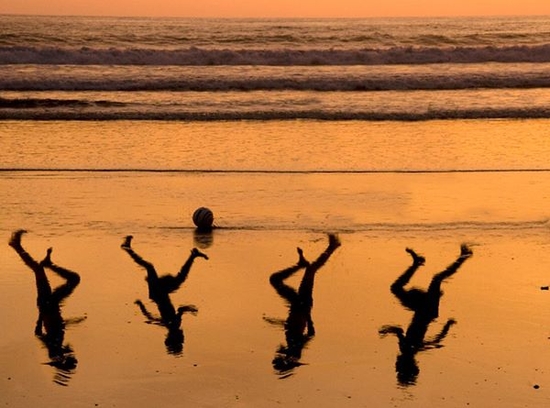 Image by Israeli artist Amir Schiby in tribute to four boys killed on a beach In Gaza. If the only deaths worth mourning are those of children, we have become complicit with the oppression that dehumanizes their communities.

In the media coverage of war, whether reports on individual incidents or the numbing tallies of casualties, the distinction between civilians and combatants is central and frequently contested. The killing of the four boys who had been playing soccer on a Gaza beach has become emblematic for Israeli violence against Palestinian civilians because the boys were clearly recognizable as children and therefore civilians. When news outlets report the death toll of the uneven conflict, they give details that bolster and yet complicate the distinction between civilians and combatants. For example, the Washington Post reports that as of July 26th, 41 Israeli soldiers and 3 Israeli civilians were killed in the recent war, whereas 129 armed Palestinian militants, 119 Palestinians with unknown roles, and 676 Palestinian civilians, including 111 women and 132 children had been killed. The level of detailed information on the Palestinian deaths suggests an uncertainty about which Palestinians count as civilians. Women and children are highlighted in this chart and elsewhere because they are undisputed civilians: they appear innocent, passive, and in need of protection.1See Helen Kinsella, “Gendering Grotius: Sex Difference and the Laws of War,” Political Theory 34 (2006): 161-191. http://ptx.sagepub.com/content/34/2/161.abstract

The civilian status of the Palestinian men seems never quite as certain, as the category of “unknown role” suggests. There is no comparable uncertainty about the Israelis who were killed: the civilians do not require demographic specification, and there is no grey zone between civilian and combatant. While the civilian is a term of international law, there is also a rich history of denying non-European populations civilian status. This undermining of civilianhood is a cousin of the more often noted refusal of European and North American militaries to regard their adversaries as legitimate combatants. The rise of the figure of the “unprivileged belligerent” or “unlawful combatant” that I have charted elsewhere is accompanied by a corresponding rise of the figure of the illegitimate, non-innocent, suspicious civilian.2“Law’s Enemies: Enemy Concepts in U.S. Supreme Court Decisions,” Studies in Law, Politics and Society 40 (2007). http://ssrn.com/abstract=1335481

The law of armed conflict doesn’t directly define civilians. It defines combatants. Whoever is not a combatant is a non-combatant. Combatants may engage in violence against other combatants, but they may not intentionally target non-combatants (civilians). Yet the civilian is more than a legally ill-defined term. The civilian is tied to imaginaries of good, virtuous wars. There are different histories of the civilian that circulate and that help us to illuminate the conflicting accounts of civilian deaths in Gaza and elsewhere.

The official history of the civilian is that since the codification of the laws of armed conflict in the Hague and Geneva Conventions, civilians are increasingly recognized and protected by international law. Armed forces publicly declare the importance of protecting, sparing, and liberating civilians. For example, the insistence of the Israeli Defence Force (IDF) that the deaths of Palestinian civilians are due to Hamas’ use of civilians as human shields is, while factually not true, evidence of the persistence of the norm that to kill civilians is to fail as a soldier. When civilians are killed, the blame is shifted elsewhere, or the status of the dead as civilian is undermined.

The shadow side of international law’s interest in protecting civilians is that those to be protected are expected to be passive, innocent, and submissive. The civilian is a caricature of the helpless woman or child who does not take part in politics.3See Kinsella, Gendering Grotius. This ideal civilian doesn’t exist in war zones. Where people live under military occupation figuring as liberation, they engage in political action against foreign rule instead of patiently waiting for deliverance. Yet in Gaza and elsewhere, those who politically support anti-occupation politics are easily cast as un-civilian.

Underneath the official celebratory story about international law’s progressive protection of civilians lurks another story: the codification of the international law of armed conflict in the late 19th and early 20th century has coincided with immense atrocities, not only in the two World Wars, but also in countless colonial wars that were not even recognized as wars. International law has done little to curb this violence and much to hide it. For example, in 1925, in response to a Syrian revolt against the French “protectorate” under the auspices of the League of Nations, French troops bombed Damascus, a city that was not defended by anyone other than the French forces themselves, killing hundreds of residents. This attack by an occupying power against people under occupation bears striking resemblances to the structural situation in Gaza, where Israel is claiming self-defence against a people that it keeps in the chokehold of a siege.4See Noura Erakat here: http://m.thenation.com/article/180783-five-israeli-talking-points-gaza-debunked In the 1920s, international lawyers debated the bombardment of Damascus. In the pages of the American Journal of International Law (AJIL), U.S. Army Captain Elbridge Colby defended the bombardment in a piece entitled “How to Fight Savage Tribes.”5Elbridge Colby, “How To Fight Savage Tribes,” AJIL 21 (1927): 279-288. www.jstor.org/stable/2189127 He insisted that the laws of war are not applicable to conflicts with “uncivilized” peoples:

When combatants and non-combatants are practically identical among a people, and savage or semi-savage peoples take advantage of this identity to effect ruses, surprises and massacres on the ‘regular’ enemy, commanders must attack their problems in entirely different ways form those in which they proceed against Western peoples.6Colby, p. 279.

Further, “[w]hen Oriental peoples are accustomed to pillaging and being pillaged, accustomed to torturing and flaying alive distinguished prisoners, you are dealing with opponents to whom the laws of war mean nothing,”7Colby, p. 285. then the conduct of war is solely at the commander’s discretion.

While Colby’s diatribes are often quoted, the more reasonable sounding article he was responding to is often overlooked. AJIL editor and distinguished international lawyer Quincy Wright offered an analysis of the bombardment of Damascus, deplored the violence, and yet concluded that since Syria was not a state, there was no legal remedy against the violence that was the quelling of an insurgency rather than an international war.8Quincy Wright, “The Bombardment of Damascus,” AJIL 20 (1926). www.jstor.org/stable/2188917 Wright’s patient, reasonable and inclusive tone reminds us that international law’s exclusions of non-European peoples is not solely the work of racist hotheads like Colby, but also of distinguished, polite, and analytical thinkers like Wright.

We have come a long way since the 1920s, but we need to remember that the international law of armed conflict was, by agreement of the colonial powers, not intended to protect colonized peoples from oppression. For example, the term civilian originally applied to white European servants and non-military personnel engaged in colonial rule.9See Derek Gregory, “The Death of the Civilian,” Environment and Planning D: Society and Space 24 (2006). www.envplan.com/epd/editorials/d2405ed.pdf The colonial powers insisted on the protection of “their” civilians but did not legally recognize civilians among the people under their rule. Before civilians are killed, their civilian status is challenged or erased, and international law has been repeatedly called upon to justify these erasures.

We see echoes of this history in the IDF’s persistent efforts to disqualify Palestinians from the status of civilian. Palestinians in Gaza live in inescapable proximity to Hamas combatants. They are exposed to the gaze of Israeli drones whose operators equate spatial proximity with association and guilt as well as to the terrifying force of Israeli bombs. They are also exposed to an international context in which many are quick to condemn the violence of non-state militaries like Hamas and slow to condemn the violence of state armed forces like the IDF. When the footage of the boys killed on the beach emerged, we watched in horror. It is certainly wrong to kill children. Yet when we see children being shot dead, we also need to acknowledge the ways in which we have dehumanized and demonized their families and friends who are no longer children and whose deaths become less noteworthy because we are less convinced of their innocence. If the only lives worth protecting and the only deaths worth mourning are those of children, we have become complicit with the “structures of feeling” (see Edward Said) that enable the oppression in the first place.

International law is often championed as a tool against violence and dehumanization, but the history of international law is entwined with histories of colonialism, oppression and racism. International law is no magic potion; it is not automatically emancipatory. When we invoke international law, we need to be cognizant of this past and ask ourselves how we use this law and this history: to lessen violence, or to justify it; to analyze oppression, or to gloss over it. We must pay attention to civilian casualties, and we must also pay attention to the ways that the categories of combatant and civilian are constituted in practice, used to assert martial virtues, or mobilized in body counts.

An earlier version of this article was published in Ottawa Citizen