Art, Law and the Elements: The Turn of the Venice Biennale

58th Venice Art Biennale ‘May You Live in Interesting Times’

The 58th Venice Art Biennale is a sweeping turn towards the elemental. Aligned with many practices and disciplines (law and art amongst them), this turn to the elemental is everywhere in the Biennale: in the choice of materials, of forms, of artists by the main curator, even in the choice of the name: the ironic title of this year’s Biennale, ‘May you live in interesting times’, refers to life in a world that is collapsing but remains “interesting” (arguably, the second most meaningless word in the English language after “nice”). This is irony at its most elemental — nothing grand or evocative as was the going habit of most of the previous years. Just a simple wish, a hope even, whose utterer however knows, in full irony, that it is as meaningless as it is inescapable.

The turn to the elemental is not just (whatever that might mean) an aesthetic move but a profoundly political one. Artists and curators are turning towards a planetary sense of urgency, mining forms and matter for inspiration, and projecting their works into a future perhaps full of “interest”, where humans are exhaling their last collective breath. On the other hand, giving pride of place to the elemental might also mean, lose nuances, become didactic, say what you want to say. And that might not always be good for art.

This year’s spectacle, curated by Ralph Rugoff (of Hayward Gallery fame), alludes to the political, ecological and social precipice on which we stand. Take the Arsenale — one of the two main parts of the gigantic exhibition that spills over in the whole city —which traditionally bears the mark of the Biennale curator more clearly than anywhere else. The long, mostly dark space is lined, divided and regulated by an almost obsessive use of plywood that becomes even more dominating than the extraordinary ancient brick walls of the old venetian shipyard. The singularity of this element brings home the layers of the elemental — an unglamorous but oh-so-trendy material that aims perhaps to be unobtrusive but in reality plunges the whole Arsenale in a continuum of subdued termporariness — things are changing as we speak, says the plywood.

Again, the choices are stark, simple, unfussed, with meanings that tend towards the emotionally and politically engaging rather than the obscurely nuanced. There is a strong (and strongly emphasised) presence of black artists (such as the photographic portraits of Zanele Muholi, the snake river of Otobong Nkanga, the soundspace of Tarek Atoui that plays with tribal objects to create simple but extremely engaging sounds; or finally, the awarded with the Golden Lion Arthur Jafa with his White Album) and also a considerable presence of women artists (half of the artists invited by the Biennale curator are women; and this year we have the first female artist Austrian commission (really?): Renata Bertlmann’s version of non-heteronormative and non-able-bodied sexuality extols a body reduced to its elements, complete with a glass vaginal flower garden.

Elemental is not always a welcome turn. There is a rather surprising return to some basic hardlines between forms and disciplinary divisions. The photography in Arsenale is very much canonical, risking no admixture or boundary confusion. Sculpture is brash and often on the nose – sculpture that cries its name rather than its meaning. Painting is often portraiture, with a predilection towards the naïf and yet somehow conventional.

Over at the Giardini, the flagship area of the Biennale with the rather antiquated national divisions, a mist created by Lara Favaretto for the French pavilion envelops in a technology-creates-nature cloud the whole pavilion and the immense (at least during the opening) queues of people waiting to walk in through a rough backdoor path. Once the basement ruins and into the pavilion, the space changes to another elemental presence: shallow fake water taking up a resin-covered littoral space with the familiar objects left behind by migrants crossing the waters: mobile phones, passports, discarded rubbish, but also anthropomorphised birds holding cigarettes as post-diluvial announcements. 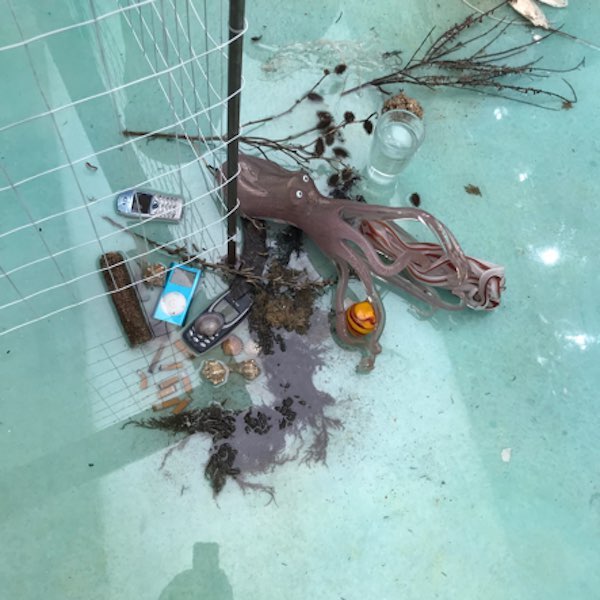 Some things, however, eschew categorisation, touching on the elemental with irresistible force. The blood sweeping mechanical monster by Sun Yang and Peng Yu, banging on a huge glass pavilion and repeating the useless work of containing the ever-spilling blood, complements their second sculptural installation of an empty marble throne of power, hissing with rage from an innocuous hosepipe that fills so abruptly with air that starts lashing aimlessly around, the self-immolating whip of an absent sovereign. Likewise, the violently swinging iron gate by Shilpa Gupta that operated as a prohibitive invitation to walk through, until one sees the traces of its brutal banging on the collapsing walls around it.

Law is constantly present in the Biennale. The New Zealand pavilion consists of several artificial trees that recount in endless, never to be completed lists, the names of extinct objects, bodies and — one of which also all the laws that have ever been repelled. What happens to repelled laws? What happens to extinct species? They become meaningless lists that nobody will ever listen or read fully. Likewise, Kenneth Goldsmith’s massive library of Hilary Clinton’s emails in the middle of a Venetian supermarket, that brings out the aesthetics of this new law, a law that needs to prove its legitimacy through spectacle.

The melancholy of the law permeates the boat of the drowned migrants, a much-criticised art gesture by Christoph Büchel that placed its massive haul right in the middle of the Arsenale grounds, a rusty erection outside its natural element, a perfect selfie opportunity of a tragedy that in real terms is now old news. There are multiple references to the failures of law — to stop the deaths of migrants, the useless exile (as documented by Edmund de Waal in his stark work Psalm at the Ghetto and in the main hall of Ateneo Veneto), the immense political violence of deaths in incarceration (a reference to which comes in Inci Eviner’s carceral space for the Turkish pavilion, or the horror of violence (the new mesmerising work by Christian Marclay, consisting of concentric stripes of war visuals in an abyss of hyperinformation that ends only in disorientation).

My take on the connection between art and law was commissioned by the Dallas Pavilion 2019, an action that encouraged artists to think of the role of art in urban regeneration. I was invited to submit a text that was posted around the city of Venice for the days of the opening, and also to perform a participatory game, originally tried out at the Arebyte Gallery in Hackney Wick, London, part of a larger project curated by artist Heather Barnett and designed by artist Julius Colwyn, urban planner Liu Yang, and me. The game, Escaping the Lawscape (click for the video) was performed in the Giardini of the Biennale and was part of the UK in Venice activities. The significance of the location is multiple: there have been queries about the exact content of the performance (“’Escaping the law’? is that anarchy? can you provide us with a detailed plan of the activities?”) which of course I could not answer fully (and clearly, “it all depends on the participants” was not the right answer). This hyperregulated epicentre of the international art scene could not apparently deal very easily with play or open performance practices. We managed, however, to go about our shenanigans, disobeying and theatrically hypercomplying, under the tight vigilance of the Biennale guards.

But perhaps the most elemental aspect of the biennale this year was the Venezuelan pavilion. The political crisis meant that the funds were not released on time and the artists and curators never managed to install. The pavilion remained shut and eerily empty in the otherwise asphyxiatingly buzzing Giardini. 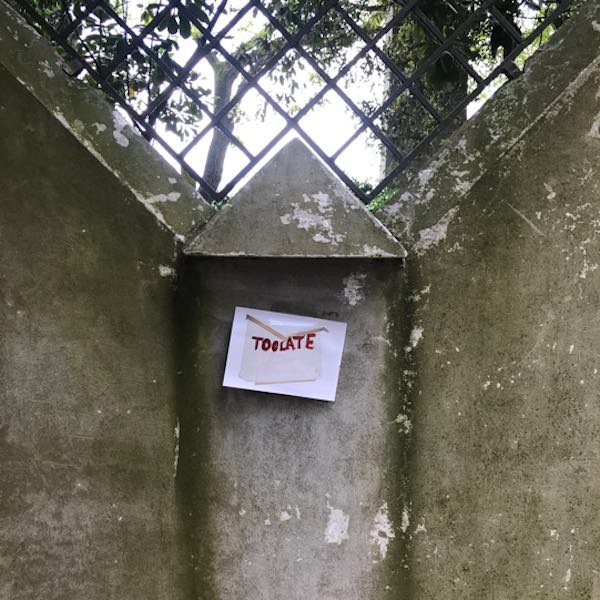 Andreas Philippopoulos-Mihalopoulos, Professor of Law & Theory at the University of Westminster, London, and Director of The Westminster Law & Theory Lab. / picpoet.net /